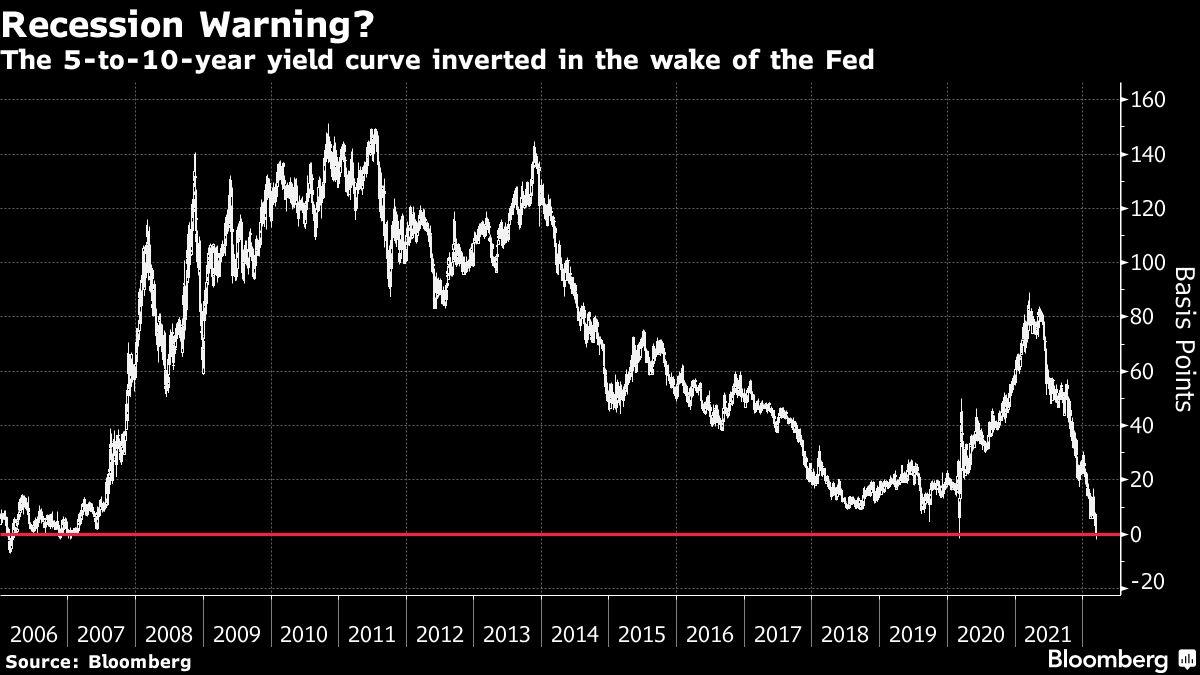 (Bloomberg) — Defying their stock-market counterparts, Treasury traders aren’t buying Jerome Powell’s upbeat pronouncements on growth. In fact, in the aftermath of Wednesday’s policy decision, one bond-market indicator of economic hardship is flashing red for the first time since the darkest days of the pandemic.

After the Federal Reserve raised interest rates and signaled hikes at all six remaining meetings this year, a section of the Treasury curve — the gap between five- and 10-year yields — inverted for the first time since March 2020. Meanwhile the flattening trend between two- and 10-year yields continued.

These are time-honored indicators of oncoming growth pains as the inflation-fueling fallout from Russia’s invasion of the Ukraine continues. With officials projecting raising interest rates as high as 2.8% by the end of 2023, bond traders are growing increasingly concerned that the economy could buckle under the weight of monetary-policy normalization.

“The market is pricing in a higher recession risk and you can see that with the inversion between five and 10-year yields,” said Andrzej Skiba, head of U.S. fixed income at RBC Global Asset Management. “The Fed is sending a strong commitment to fighting inflation.”

In a meeting seen as hawkish on many fronts, Fed Chairman Powell reiterated the central bank is keeping all options on the table to fight the hottest pace of inflation in decades. In turn, traders pushed the two-year yield to a new cycle high just shy of 2% and at one point priced in a more than three-in-four chance of a 50 basis point hike in May.

While stock traders took solace in the Fed’s iron-clad resolve to restore price stability, bond investors — already grappling with worst performance for the Bloomberg Treasury index in decades — are bracing for fresh losses.

“It is as if Powell wants to sounds upbeat but at the same time tough on inflation without signaling that this will ultimately end with a policy error and a risk of a recession on the back-end,” said George Goncalves, head of U.S. macro strategy at MUFG. “Time will tell.”

The Fed’s forecasts for aggressive hikes were deemed by some as an admission that policy has proved well behind the curve given elevated inflation. At the same time, in the press conference that followed the interest-rate decision, Powell’s hawkish signals also posed a challenge to those in the bond market that had expected a more measured tightening pace given the uncertain global economic backdrop.

At the same time, Powell downplayed the risk of a U.S. recession next year while stating monetary policy can tighten without sacrificing economic growth.

Treasuries rebounded across the curve in Asia trading following a steep selloff on Wednesday. Five-year yields dropped five basis points to 2.14%, as did their 10-year equivalents.

Asia’s equity benchmark rallied more than 3% following the rally in U.S. stocks — bucking the concerns seen in the bond market. While economic data point to a robust investment and consumption cycle — and a healthy labor market to boot — a bevy of Wall Street strategists are treading carefully.

“They are in full mode of trying to bring inflation down,” said Diane Swonk, chief economist at Grant Thornton on Bloomberg television. “The Fed is chasing inflation now,” added Swonk, who predicted the U.S. economy will slow during the second half and is at risk of a recession given the twin blow of Fed tightening and higher oil prices.

Whether a Fed-spurred tightening in financial conditions would materially undercut economic growth and hurt stocks anew is an open question. Another question: Would monetary officials call for a pause in hikes by the middle of the year if the volatile global backdrop endures — a period when the central bank is also expected to start shrinking its near $9 trillion balance sheet?

Until clarity emerges on these fronts and more, big swings in the bond market will remain the order of the day.

“Market volatility is always higher when you don’t have the answers,” said RBC’s Skiba.

Biden details new aid to Ukraine, promises "more in the days and weeks ahead" to help combat Russia invasion