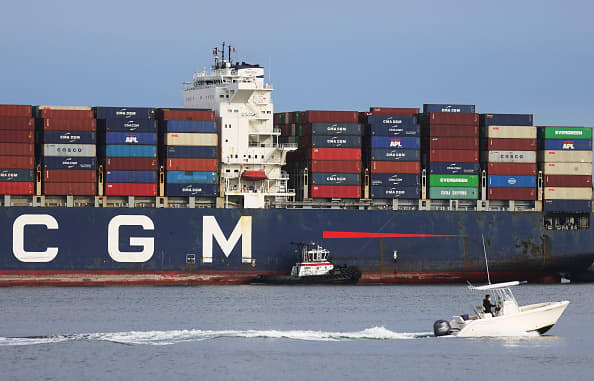 Just one week after CNBC’s two month investigation into shipping carriers‘ rejection of U.S. agricultural exports, California is calling on the Federal Maritime Commission (FMC) for immediate action. A letter to the FMC was signed by several state officials asking for immediate steps in reviewing the carriers‘ export policies.

Shipping carriers rejected U.S. agricultural export containers worth hundreds of millions of dollars during October and November, instead sending empty containers to China to be filled with more profitable Chinese exports, the CNBC investigation found.

In the letter obtained by CNBC, state officials said, „We are writing to seek your assistance to address the current delays and ongoing shipping challenges in California ports which are significantly impacting the operations of businesses throughout the state. In particular, the operations of our agricultural sector which relies heavily on export markets are being heavily affected.“

The letter urging action comes after FMC announced an investigation in November on trade out of key ports in California, New York and New Jersey to see whether the carriers‘ refusal to load U.S. export cargo was a violation of the Shipping Act.

The act makes it unlawful for carriers to „unreasonably refuse to deal or negotiate,“ „boycott or take any other concerted action resulting in an unreasonable refusal to deal,“ or „engage in conduct that unreasonably restricts the use of intermodal services.“

The World Shipping Council (WSC), which members control approximately 90 percent of the global container fleet, and the Pacific Merchant Shipping Association (PMSA) responded to California officials, pushing for better communication between them versus involving the FMC.

In a two-page letter given to CNBC, the two groups blamed the record surge of imports from China as the catalyst impacting the port’s efficiency and associated charges importers and exporters are paying.

The WSC and PMSA listed the export sales volumes of the various agriculture exported out of the Port of Los Angeles and said it demonstrated a „substantial increase“ year-on-year. The group then characterized it as a „mistaken impression that California’s agricultural exports are being excluded from access to the international supply chain.“

CNBC previously reported that while agricultural export volume for 2020 was larger than 2019 because of the U.S. Phase One trade agreement with China, the purchases were short of targets. According to the Peterson Institute for International Economics, China imported $100 billion of the U.S. goods agreed to in the deal — roughly 58% of the targeted $173.1 billion. Exports are not official until transported and processed in the country of destination. The increase in agricultural exports, though, pales in comparison to the increased ration of empty export containers.

CNBC launched its own review on the import and export data and concluded carriers rejected an estimated 177,938 containers known as TEUs (20-foot equivalent units) in October and November, according to analysis of data compiled from the Census Bureau and the ports of Los Angeles, Long Beach, California, and New York and New Jersey. The total value lost export trade from those ports is $632 million.