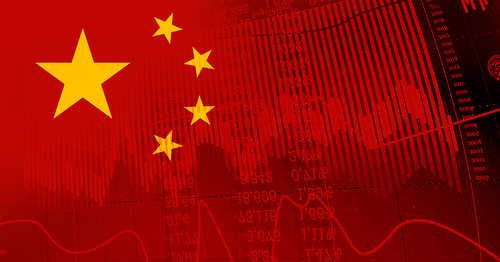 The six-week Ukraine-Russia war is a regional conflict, but it’s setting off tremors felt thousands of miles away. China, for one, has recently witnessed significant capital flight on the part of its highly-prized foreign institutional investors.

“Something very unusual is happening in global [capital] flows,” the Institute of Institutional Finance (IIF) noted recently in its Global Macro Views report. China is experiencing capital outflows of an “unprecedented” scale and intensity, and while the IIF can’t say for sure that this is connected to the war, circumstantial evidence is mounting.

For one thing, the strong outflows began only after Russia invaded Ukraine toward late February. Secondly, “we are not seeing similar outflows from the rest of emerging markets,” said IIF. Indeed, the current circumstance where China has gone “negative” while other emerging markets‘ capital flows remain positive or neutral is unparalleled over the past 10 years.

The trend shows no signs of abating, either, since IIF’s March 24 report. “The dynamics described a couple of weeks ago have not changed,” Jonathan Fortun, an economist with the Institute, tells Global Finance. “Our capital flows tracker released this AM [Wednesday morning, April 6] shows an outflow from China of around $17.5 billion, for both bonds and equities.”

How to explain it? “The Russian invasion of Ukraine caused international investors to pause for thought on where their international investments reside,” Padhraic Garvey, Regional Head of Research, Americas, ING Financial Markets LLC, tells Global Finance. “The remarkable ability of the West and NATO generally to freeze out Russia at will has been taken note of.”

But why China? Is it being punished for providing Russia with political  and economic support in the face of Western sanctions? Or maybe investors think China itself could become a sanctions target itself, particularly if it invades Taiwan?

“It does appear at this juncture that Russia will be looking more towards China as a market for its wares generally,” says Garvey. “Given the extent that Russia is being shunned by the international community, there is an element of China being tarnished by implication.”

„We will have to see whether the recent-capital flight related to the Ukraine crisis will last or not,” Yun Sun, director of the China Program at the Stimson Center in Washington, tells Global Finance. And its drivers? “I don’t think it is moral outrage—capitals worry about losses, not morality.”

The war in Ukraine has led investors to sell what they hold, and “as Russian transactions in euros and dollars are restricted, people worry that it might sell its Chinese assets to raise funding,” Sun adds.

Others don’t mention the Ukraine conflict at all when explaining the recent capital reversals. Outflows from China have been „massive“ recently, confirms Alicia García-Herrero, chief Asia Pacific economist at Natixis in Hong Kong, „both fixed income and equities.“ García-Herrero tells Global Finance that she expects this flight to continue, though not necessarily as a direct result of the war but rather because „the yield differential with the U.S. has disappeared and credit risk is much higher for sovereign/quasi sovereign“ debt.

As for equities, there seems to be „no end in sight to the bear market“ as regulators continue with their crackdown. (She also reports outflows from other Asian economies, “especially Taiwan.”)

Fortun says that reasons for the reversal remain “pure speculation” for the time being, but adds that “we hope to clarify the perspective in coming weeks as fresh data on flows comes up.” That said, “the dynamic described here is unusual, especially taking into consideration the previous global risk episodes, where we saw China flows holding,” he tells Global Finance.

In any event, China’s loss of its foreign investors may not be terminal. That nation has run a large current account surplus and has been a net exporter of capital in recent years—an avid purchaser of U.S. Treasuries, for example. So more outflows now wouldn’t be “hugely detrimental,” says Garvey.

But that too could change, especially if China should “flip to running a current account deficit with the rest of the world,” explains Garvey. “What is more important for China is access to international markets,” he adds.

It’s probably too early to conclude that the capital outflows from China represent a “structural change,” said the IIF in its report, but the timing does suggest the invasion of Ukraine “may be playing a role” in investors’ perceptions, “making them look at China in a new light.”

Sun, for her part, cautions against over-reacting to recent capital movements. „Capital flight is not a new issue for China,” she says. “The Ukraine crisis aggravates it, but didn’t create the problem.“

Does she expect the outflows to persist? “I think they will continue,” she tells Global Finance. “But for China the most important issue now is domestic stability, so [Chairman] Xi can ink his third term at the 20th Party Congress. As long as the capital flight does not create instability, I don’t think it will be Beijing’s top priority.”