European Gas Falls to Lowest Since Russian Invasion of Ukraine 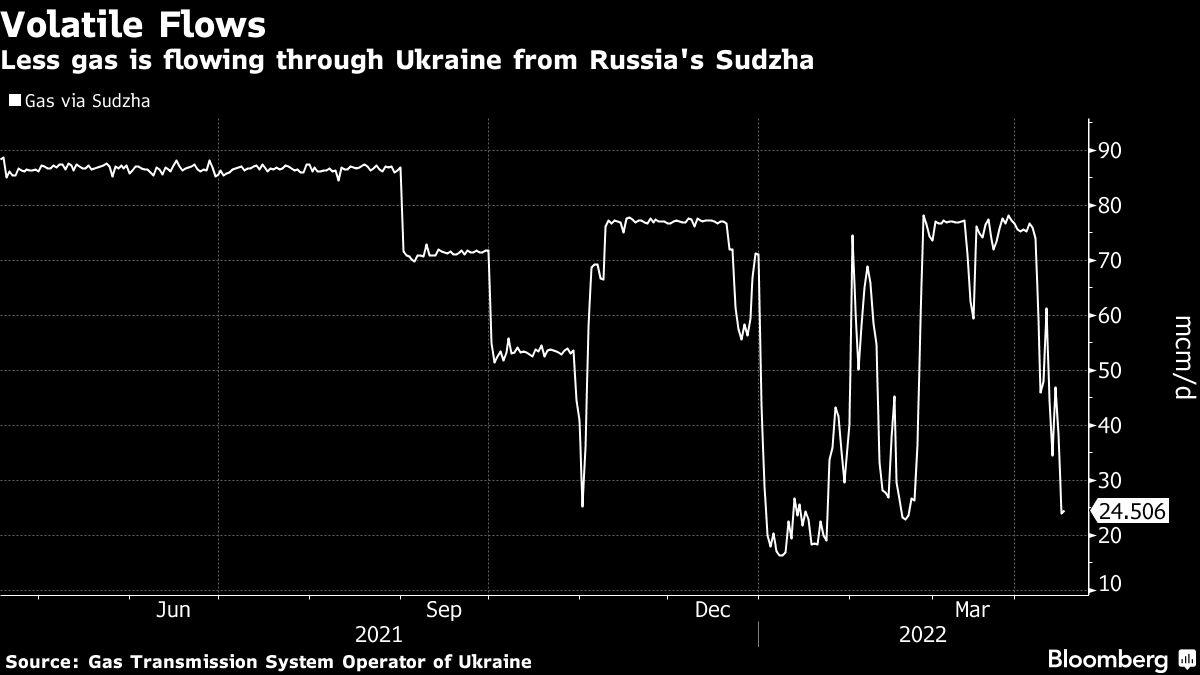 (Bloomberg) — European natural gas extended its decline to the lowest level since the start of Russia’s war in Ukraine, amid warmer weather and signs from the Kremlin that payment for the fuel in rubles isn’t expected until next month.

Benchmark Dutch gas futures fell as much as 12% to 84 euros per megawatt hour — the lowest level since Feb. 23, the day prior to the Russian invasion — before paring some of those losses. The front-month contract settled 9.2% lower on April 14, ahead of the Easter holidays.

The market has been focused on shipments from Russia, its largest supplier, particularly following President Vladimir Putin’s demand last month that “unfriendly” buyers pay for gas in rubles. The European Union’s lawyers have drafted a preliminary finding that the payment mechanism would violate the bloc’s sanctions.

There is still “some time” for Europe to pay for Russian gas shipments in rubles with payments for April supplies mainly “due sometime in May,” Kremlin spokesman Dmitry Peskov said on Monday. He declined to comment on whether any customers have agreed to pay in rubles or set up accounts as mandated.

Above-average temperatures in southeast Europe are set to expand into the mid-continent next week, Maxar said in a report. That could relieve some pressure on demand for natural gas. Iberia will be colder than normal, the forecaster added.

Even before the war in Ukraine, Europe was dealing with an energy supply crunch and competing with Asia for cargoes of liquefied natural gas. Pandemic-related lockdowns are now weighing on demand in Asia.

“Gas prices have come down quite a bit as short-term fundamentals soften,” said Edmund Siau, lead analyst for gas and LNG at consultants FGE. Demand destruction and fuel switching have eased pressures on European gas prices but competition from Asia looms, he said. “Traders are wondering what Asia is going to do with China’s lockdowns and what the plan is to restock before winter,” he said.

Still, Russian gas flows via Ukraine are expected below capacity on Tuesday, after orders for supplies dropped before Easter. Gazprom PJSC has said its shipments are in line with client requests.

While gas arriving in Ukraine from Russia’s Sokhranovka network point has been relatively steady, flows from the Sudzha station have slumped in recent days. Flows via the Nord Stream link remain stable, grid data show.

“A continuation of below-normal wind generation into tomorrow is offering bullish pressure to prompt U.K. energy contracts” while high LNG shipments to the U.K. are cooling futures prices, consultant Inspired Energy Plc said in a note.

Front-month German power declined as much as 6.9% to its lowest level since April 14, before paring some losses.