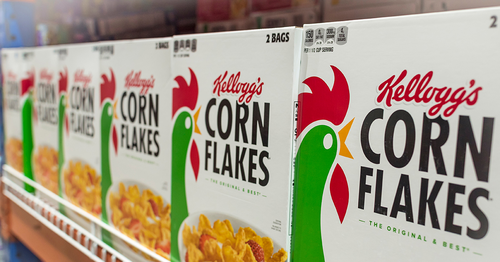 Corporate breakups like Kellogg’s are popular again—and it’s not just in the US.

Back in 2016, private equity firm Acharya Capital Partners had to decide what to do with the international division of its portfolio company, a global marketing agency called Impact XM. „[We] felt we were better off managing our operations from the US,“ founder and managing partner David Acharya tells Global Finance.

The firm could either sell the business to an eager buyer, or break it off into a public company. Even though a spinoff typically generates no tax liability, that wouldn’t have been the case with Impact XM, Acharya explained. Therefore, the firm opted for a sale figuring it could allocate the proceeds to something that could potentially drive a higher return. “Sometimes an outright sale is needed,” Acharya says.

These days, with M&A volume and IPO activity tapering off, corporate breakups are popular again. Just this past week, snack and cereal giant Kellogg grabbed headlines for unbundling its various businesses to satisfy investors looking for a boost amid concerns of inflation and rising interest rates.

The Battle Creek, Michigan-based food manufacturer agreed to divide itself into three separate companies: one focused on global snacks ($11.4 billion in net sales), another on cereal ($2.4 billion in sales) and another on plant-based foods ($340 million in sales). Shareowners would receive shares in the two spin-off entities on a pro-rata basis relative to their Kellogg holdings at the record date for each spin-off.

Other big-name companies found themselves in similar situations this year. Pfizer’s $11.6 billion acquisition of Biohaven is subject to the completion of a spin-off deal. Vista Outdoor Inc. approved a plan to separate the company’s outdoor products and sporting goods segments into two independent, publicly traded companies. And Fidelity National Financial Inc. recently confirmed that its annuities and life subsidiary is to be separated into a publicly traded company. Johnson & Johnson and General Electric also have spin-off initiatives in the works.

And the trend isn’t exclusive to the U.S. In May, Paris-based Sanofi spun off its drug ingredients business. And in July, London-based GlaxoSmithKline is expected to split Haleon’s consumer health unit off into a separate entity.

“Given the latest market volatility, including growing inflationary concerns, I expect managements and boards will continue to look at spinoffs as a viable tool to enhance shareholder value,” Acharya said.

Kellogg chair and CEO Steve Cahillane echoed that sentiment when he told the Financial Times how dividing the company into three separate entities via tax-free spinoffs would “help the business operate in a tumultuous time.”

But lots of things can go wrong with spinoffs, Acharya warned, citing the need for a “strong culture” at both the mother company and the spun off entity.

All of the various components that come with a spinoff—changes to management, tax considerations, separate financial statements, the ability for operations to be standalone and a common public and internal communications strategy—must make up “a solid framework,” he explained.

Without it, “then the spin-off will not be successful,“ Acharya added.

Depending on the operating and management structure of the original corporation, the carving-out of the “new” corporation from the parent can be complex and prone to execution risks, according to Amit Thakur, a managing director at Amax Capital and CFO of Augie.

“There is also the issue of dis-synergy from replication of overhead costs,” Thakur said. “If there are employee and management stock programs, a spinoff that results in employees owning stock in both corporations can lead to blunting of focus on the business.”

Still, expect an uptick in spin-off activity for the foreseeable future, due to the lull in M&A activity and the increased cost of capital, Thakur explained. Corporations will start “floating businesses that they cannot grow through acquisitions in the near term,” he said.

As for where spin-off activity can surface next, Thakur says keep an eye on the sustainability sector as companies make broad moves towards de-carbonization.

“This will likely drive a lot of spin-off activity in the industrial space where large corporations will want to segregate the more-green and less-green businesses,” he said. “And finally, geopolitics, including sanctions, will likely drive some activity on this count as well.”

Wondermed pulls $4,600K out of a hole to ply you with ketamine – TechCrunch