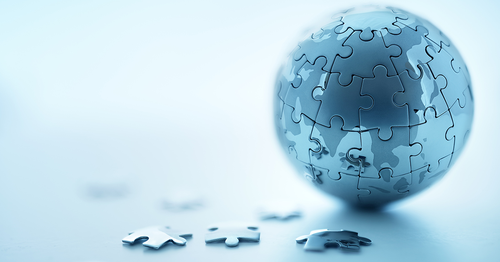 Global trade is going through deep changes—large corporations are partially reshoring manufacturing, governments are demanding more diversification, and data and services are gaining more weight over goods—but experts say it is here to stay.

“Nothing is more fashionable these days than writing the obituary for globalization,” says Joseph Quinlan, head of Chief Investment Office Market Strategy for Merrill and Bank of America Private Bank. But, he adds, like Mark Twain, reports of its demise are greatly exaggerated.

Proponents credit globalization for much of the economic development of the last 30 years. Since the fall of the Berlin Wall in 1989, almost every country in the world has become part of an extended network of trade.

“The big reason for the rise in trade as a share of GDP from the ’50s to the ’90s was the lengthening of supply chains,” explains Jeffrey Frankel, an international economist at Harvard University’s Kennedy School of Government. “It paid to build intermediate products from countries where labor was cheaper, and hold lower inventories.”

Widespread lockdowns under Covid-19 brought to the fore some of the limitations of extended supply chains—the empty store shelves, lagging medical supplies and disappearing microchips that led to fewer cars and computers being produced. “Supply chain,” once jargon for insiders, made daily headlines, with delays leading to consumer frustration. Nevertheless, overall trade remained resilient, with international trade in goods and services for 2021 hitting a record high of $28.5 trillion, according to the UN Conference on Trade and Development, 13% above the pre-pandemic level of 2019.

Now, of course, Russia’s invasion of Ukraine and the consequent sanctions are putting another set of supply chain risks into the spotlight. The April update to the International Monetary Fund’s World Economic Outlook (IMF WEO) cites a multitude of spillover impacts from the war on the economy and trade. With Russia and Ukraine accounting for nearly 30% of global wheat exports and a significant proportion of other food staples, the war is pushing food prices up for much of Africa and Europe. At the same time, Russia’s oil and natural gas are by far the main sources of energy for Europe, which faces the thorny problem of disentangling itself as it suffers from rising prices for heat and transportation.

The IMF projects global GDP in 2022 to register 3.6%, a cut of 0.8% from its January forecast. “The trend can get worse if the fall in global demand due to the slowdown triggered by the war gives rise to a second round of negative effects on trade,” says Andrea Presbitero, a senior IMF economist and one of authors of the April WEO.

Such headwinds suggest parallels to the troublesome post-World War I era when, as now, Europe remained on edge, a recurrent pandemic swept the world, and a change in the international order was afoot. But the trade slump of the 1930s is nowhere in evidence today.

“Even with all the tensions between the United States and China, US-China trade is still near all-time highs,” says Quinlan of Merrill/Bank of America. “You can’t even say we are deglobalizing Russia; we are still paying for their oil and natural gas. This is the European Union every day—every day. You know, Russia is owning a billion dollars in energy, courtesy of the European Union.”

From „Just in Time“ to „Just in Case“

Trade was in decline even before tariffs on Chinese goods imposed by former US President Donald Trump (and left in place by President Joe Biden). “The efficiencies that can be obtained out of lengthening supply chains and holding lower inventories run into sharply diminishing returns,” says Harvard’s Frankel. “Firms will start to hold more inventories: They say it’s a switch from just-in-time inventory practices to just-in-case inventory practices, meaning more risk aversion.”

Three important factors contributed to a slowdown in the growth of international trade and are expected to drive trade in coming years. First, technological progress has moved in a direction that demands less in the way of shipment of material goods. Second, the pandemic has made clear that the reduction in costs from offshoring is balanced by a risk of supply disruption. Third, international tensions have forced governments to consider strategic factors, not just economic ones, when evaluating trading partners.

Supply chains are becoming more expensive because rising energy costs mean higher costs to move goods. Agritalia, a supply management company offering services to Italian exporters, says it has historically been more expensive to make pasta in the US, due to labor and grain costs, than to make it in Italy and ship it across the ocean.

Now, however, the rising cost of freight is reducing the gap, says Sales and Marketing Director Leo Nucera. In the last 12 months, the price of sending a cargo from Naples or Genoa in Italy to Long Beach in California has increased almost 150%, Nucera says. Some products, such as olive oil, cannot move production easily, he says. But in general, he believes that the incentives to produce pasta—or any other good—closer to the final consumer will become stronger.

Reshoring is sometimes linked to innovation, says Paul Donovan, chief economist of UBS Global Wealth Management. “We are seeing a long-term structural trend to move away from globalization to start producing goods in a more local manner, which is a good thing because it’s all about increasing efficiency.”

He brings up the example of music and TV entertainment. In the past, movies and music were supported by compact discs or DVDs and shipped physically, while today this is done via streaming: “The ultimate localization is that you get music on your mobile phone in your pocket.”

Other elements linked to technology are the replacement by robots of hundreds of workers in distant countries and the reshoring of manufacturing in high-capital factories using less labor.

Technology is offering even more potential upsides for trade because it offers the possibility to produce services overseas: a wide range of professional services such as medical consultation, design, consultancy, translation or editing that can be delivered over the internet or via video. Trade in data is also showing sharp increases and offers a new way forward for international trade.

“Globalization is always ebbing and flowing in different dimensions,” says Matthew Slaughter, dean and professor of international business at the Tuck School of Business at Dartmouth. “It is clear right now that the widespread lowering of barriers to international trade and investment has been slowing and continues to slow. But one of the dimensions of globalization that continues to accelerate is the surge in the cross-border flow of data and other forms of information.”

“It’s remarkable how the global economy has become almost this perpetual motion machine of data. It produces data; it consumes data; it processes it. And the economic potential for more cross-border flows [of] data is large,” says Slaughter, adding that countries should imagine new rules for trade and for moving data—creating “a sort of WTO [World Trade Organization] for data.” As he points out, unlike material goods such as oil or a computer chip, data can be used by multiple people without diminishment. “The more individuals and companies have access to data,” he says, “the more economically productive they can be.”

Producing more locally can reduce uncertainty and risk. At the start of the pandemic, the lack of surgical masks—back then, mostly produced in China—was a shock in most Western countries. The microchip crisis and the shortage of goods that followed also called out the need to manage risks in a different way.

“Countries express the need to be less dependent on value chains that are complex, often opaque and sometimes linked to nonfriendly countries. Reshoring, onshoring and friend-shoring have become very common words these days. There is a demand to bring back the production of goods, particularly essential goods, near home or in friendly countries,” says the IMF’s Presbitero. “These calls may be premature, if not misguided. The solution is not stopping [or slowing down] trade, but making trade more diversified.”

To mitigate risk, it is vital that a single country does not depend on another single country or even a single region. The countries that have the largest diversification in trade are also those that can better minimize the negative impact. Recently some German car manufacturers had to slow production because intermediate goods coming from Ukraine and Russia were halted. The production of neon gas, which is used in the manufacture of silicon chips, is concentrated in Russia and Ukraine. Palladium and nickel are two metals exported by Russia that are used in catalytic converters and batteries.

While governments could in principle run stress tests on key value chains the way central banks run stress tests on bank balance sheets, it is easier said than done. “Microchip supply chains, for example, are so important that we should be able to simulate stress situations in key countries—for microchips it could be Taiwan—and see how these shocks are transmitted to different producers of cars, computers and other goods,” Presbitero says. “Factory partnerships are usually considered very private information and very strategic decisions for each producer.” Stress tests are “an interesting idea but difficult to realize,” says Presbitero.

Political considerations also lend support to reshoring. Frankel, who served on the Council of Economic Advisers under former Presidents Ronald Reagan and Bill Clinton, laments an approach that focuses on China as an economic threat.

“We wanted their cooperation on all kinds of other things, like climate change and dealing with North Korea, which are, you know, serious issues,” he says. “It may be funny for any economist to say too much emphasis was placed on the economic side and not enough on the national security side of it, but I think that’s true.”

New deals across the world are coming into the limelight. The Regional Comprehensive Economic Partnership (RCEP) came into force in January 2022, creating a free-trade region among Asia-Pacific regions. The new prospective trade increase generated by this deal is not enough to compensate the loss of volume in other, nonparticipating countries such as the US and Europe; but there is a show of interest in creating new centers of commerce, alternatives to the classic powerhouses.

“I think the RCEP within Asia will probably encourage increased trade in that region. In the Asean [Association of Southeast Asian Nations] countries, trade growth has been strong. But I don’t think these regional agreements are enough to offset the bigger-picture trends here,” notes Ed Alden, a senior fellow at the Council on Foreign Relations. “The big trading powers are the US, Europe and China. All in all, technology, the need to minimize risks and weaponization of trade will impact the volume [of trade]; but they will dent it, not destroy it.”

“Countries will be more careful trading with insecure sources of supply, and we’ll be looking more to trading with our allies—I think this is what the US administration calls ‘friend-shoring,’ which is a terrible word, but catches it,” says Princeton’s Grossman. “Firms have become aware of the need for more resilience, and we’ll see more diversification.”