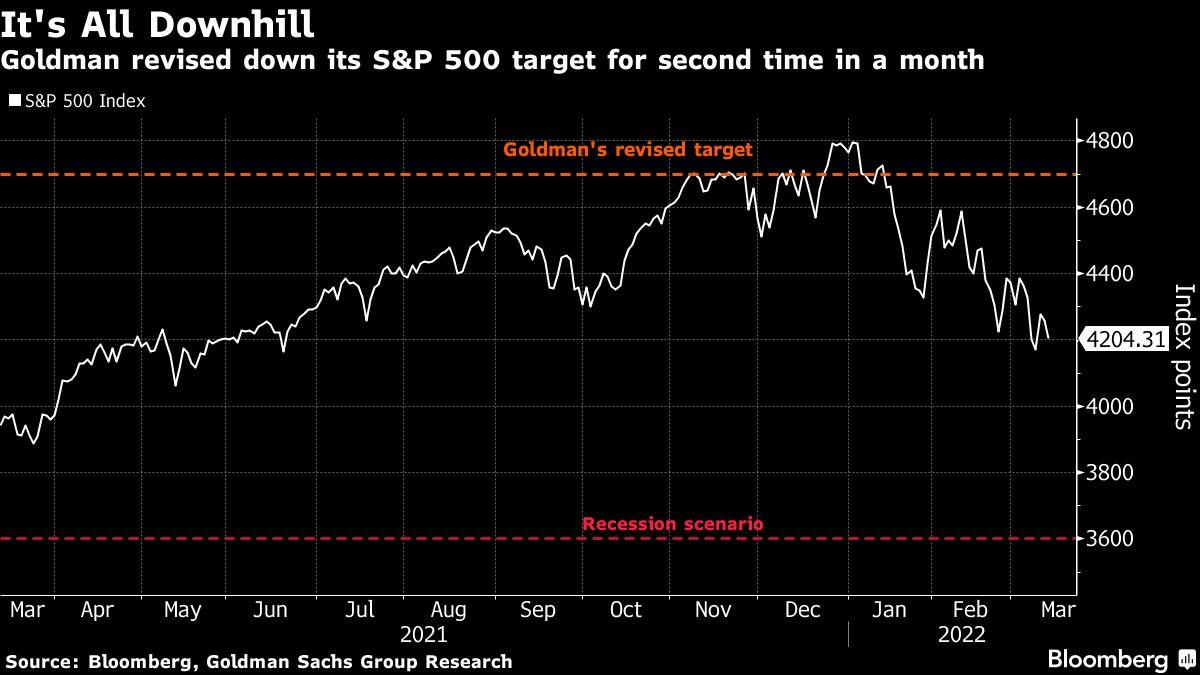 (Bloomberg) — Goldman Sachs Group Inc. strategists lowered their target for the S&P 500 index for the second time in a month, implying negative returns for the year, after a global commodity crunch triggered by Russia’s invasion of Ukraine deepened the slump in U.S stocks.

“The larger risk to S&P 500 earnings stems from higher commodity prices, and in turn weaker consumer demand and economic growth,” the strategists led by David Kostin wrote in a note to clients. They revised their year-end forecast for the main U.S. equities benchmark to 4,700 index points, from 4,900 previously. The strategists now expect earnings-per-share to grow an annual 5% to $221 in 2022, down from a previous estimate of 8% growth to $226.

Goldman’s initial year-end target of 5,100 points for the S&P 500 was cut last month, following a rout caused by fears that the Federal Reserve will have to tighten its policy more aggressively than previously anticipated to tame surging inflation. The selloff has since intensified as a wave of sanctions against Russia — one of the world’s major commodity producers — over its invasion of Ukraine has exacerbated price pressures.

The recent retreat means that Goldman’s revised target still sees a 10% upside from current levels. On a full-year basis though, the outlook implies marginally negative returns for U.S. stocks, a far cry from the ferocious rally of 2021 that saw equities climb to successive records.

The worst may be yet to come, as the Wall Street behemoth’s economists see an up to a 35% probability of a recession in the next year.

A recession risk is “partially priced” at current levels, Goldman’s strategists said in their note. “In a downside scenario, we expect reduced earnings and valuation multiples would cause the S&P 500 to decline by 15% to 3,600,” they said, recommending that investors maintain overweight positions in the energy and health care sectors to weather the storm.