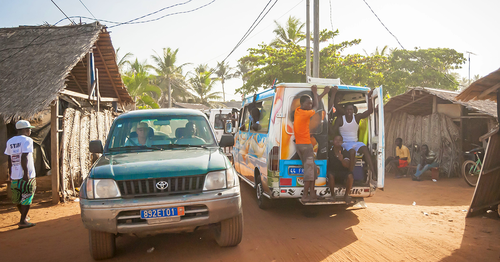 Despite all the problems plaguing the continent, Africa’s youth sees a brighter future ahead.

Are the people of Africa really among the least happy in the world? This is the question that a team of researchers tried to answer in a chapter of the World Happiness Report in 2017. Five years later, that question is still relevant: out of 146 countries and territories surveyed in the 2022 edition of the ranking, only 9 are among the top 100, and not one breaks into the top 50.

Certainly, the explosion of the Covid-19 pandemic did not help. The human toll, the report pointed out, has been less severe than elsewhere. On average, the national median age in Europe is over 40 years while in many African nations is less than 20. Populations often live far removed from urban areas which are the biggest centers of infection, comorbidities are less common, more time is spent outdoor due to higher temperatures, more people are engaged in farm work, and many people in Africa have dealt with epidemics such as Ebola. There are fewer international tourist arrivals, too.

Yet, the coronavirus crisis translated into lost economic productivity and trade both within and among African nations. Countries depending mainly on agriculture saw a drop in exports, those relying on oil exports saw a decline in prices and in government revenue. There were almost no policy measures aimed at cushioning income and job losses. Already insufficient hospitals and clinics were overwhelmed and understaffed.

Of course, the coronavirus crisis is only the latest in a long string of problems that have plagued the African continent for too long—the legacy of colonialism, authoritarianism, corruption, political and ethnic divisions. Poor infrastructure and lack of services contribute to poverty and depress happiness. Not only that, surveys and empirical observation suggest that citizens might be willing to give up their democratic rights in favor of better living conditions.

So, how did the researchers answer that question about Africa being the least happy region in the world? The best they could. Indeed, there is happiness among the people living on the continent, although it is often despite the circumstances rather than because of them as the report’s authors note: “Most countries in the world project that life circumstances will improve in future. However, Africa’s optimism may be exceptional. African people demonstrate ingenuity that makes life bearable even under less than perfect circumstances.” The citizens of this continent are essentially optimistic, the researchers wrote, most of all the youth who have their lives ahead of them: “What if the African youth’s confidence in their future and their entrepreneurial spirit were to be matched by substantial investment in their development? Then, no doubt, African countries would join the ranks of the world’s prosperous and happy nations.”

Google this West-African country of 26 million and you will learn about its beach resorts, luxurious rainforests and rich wildlife. The Ivory Coast is also a fast-growing economy, the world’s top exporter of cocoa and an oil producer. And while in 2020 its growth momentarily hit the brakes as result of the pandemic, it resumed its run in 2021, posting a 6% increase in production.

For more than three decades after its independence from France in 1960, Ivory Coast was considered a success story for its religious and ethnic harmony. This ended in 2002, with the start of a five-year civil war that effectively split the country between a predominately Muslim north and a predominately Christian south. After a second civil war in 2010-11, the nation was again reunited as a single state. However, according to democracy watchdog organization Freedom House, ”Several root causes of the country’s violent conflict remain, including ethnic and regional tensions, land disputes, corruption, and impunity.”

In the midst of all that, the Ivory Coast still managed to go from the 151st spot it occupied in the ranking in 2015 to the 88th it holds today as the third-happiest nation in Africa.

Libya is not what comes to mind when you think of a happy nation. Indeed, placing 86th in the global happiness index, it is midway between glee (Finland, the happiest country in the world) and sheer misery (Afghanistan, at the bottom of the ranking). Its position in the ranking should be taken with a grain of salt too, as it is one of a handful of countries whose averages could not be updated and are based on the 2019 survey. Then again, these averages tend to change slowly over time and dramatic drops or surges from one year to another are rare.

Oil revenues, especially now that the price of crude is soaring after several years of decline, and a small population of just 7 million explain why Libya boasts one of the highest nominal per capita GDP on the continent. Yet, too much inequality means that about a third of the population lives at or below the poverty line. To make matters worse, after longtime ruler Muammar Gaddafi was removed from power in 2011, the country has experienced conflict and political chaos.

The notion that Libya routinely ranks amongst the happiest countries in Africa seems to baffle and even amuse many Libyans. And while it remains true that happiness can be achieved despite less-than-ideal circumstances, the World Happiness Report has not failed to register the increasing pessimism of the Libyan population and the rapid deterioration of its standards of living: slowly but surely, since 2015 the country has slid in the ranking by 23 positions.

White sand beaches, turquoise ocean waters, breathtaking forests. It is easy to picture this island off the east coast of Africa as a happy place. Its distance from the mainland also made it less exposed to some of the political and economic maladies hampering the rest of the continent.

Mauritius is a rich, well-administered model of democracy and an ideal place to live and launch a business. With its mix of ancestries— Indian, Creole, Chinese, French and more—is also one of the most ethnically diverse countries in the world.

Despite the pandemic, which resulted in a big blow to the tourism industry, this nation of 1.3 million lost overall only three spots in the happiness ranking compared to 2019 (but still gained nineteen positions since 2015). More worrying, however, is the rapid rising in sea levels, which will continue to threaten the coastal zones and the island’s main revenue source long after Covid-19 is (hopefully) a distant memory.