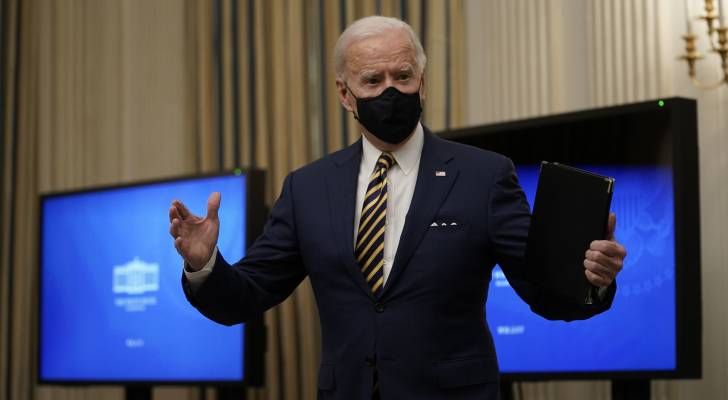 Even if your student loan debt is on an extended pause thanks to COVID aid, you’re probably dreading the day when it eventually returns. What if someone could give you a special eraser to make that red ink of yours go away?

That’s not quite the plan endorsed by President Joe Biden, but he and a vocal group of backers have floated the idea of canceling thousands of dollars in student debt per person.

With both the U.S. House and Senate now run by Biden’s Democratic party, the chances for broad student loan relief seem stronger.

But even if the current plans do become reality, they won’t completely wipe out student loan balances — and they may come with a gargantuan “tax bomb” for you. Here’s what you need to know.

How much debt could be forgiven?

Americans currently hold more than $1.7 trillion in student debt, according to the Federal Reserve. The new president has already extended the pandemic moratorium on student loan payments and interest, at least through September.

But Biden wants to go further. He has said he supports legislation that would „immediately“ forgive $10,000 in federal student loan debt per person.

Borrowers are in „real trouble,“ Biden said during a briefing in mid-November. „They’re having to make choices between paying their student loans and paying their rent, those kinds of decisions.“

They want the Biden administration to cancel up to $50,000 in debt as a form of economic stimulus — to give borrowers room in their budgets to take out mortgages and invest for retirement.

Besides widescale loan forgiveness, several other measures are being talked about to reduce Americans‘ student debt, including improvements to the government’s income-based repayment program and the current Public Service Loan Forgiveness Program.

The big problem is that these measures would be extremely expensive. Biden may fail to pass them if he encounters objections from conservative Democratic senators, because the Senate’s new Democratic majority is razor-thin.

Some backers argue that the president can use an executive order to cancel debt under the 1965 Higher Education Act, but that could lead to a major legal battle for the new administration.

Or, Biden could try to pass a watered-down plan that might have wider appeal in Congress. A compromise could target only borrowers who are in serious economic distress — and it may not be tax-free.

Tax bomb on the way?

Normally, you need to pay income taxes on the balance of canceled debt, as if you „earned“ it in cash. That means Americans benefiting from tens of thousands in loan forgiveness could face an enormous bill at tax time.

Goldman Sachs suggests borrowers may be on the hook for as much as 20% of the amount forgiven, Forbes reports.

In his campaign platform, Biden vowed to amend the tax code to make forgiveness through the existing income-based repayment program tax-free, saying „Americans shouldn’t have to take out a loan to pay their taxes when they finally are free from their student loans.“

While Schumer is calling for any and all student loan forgiveness to be tax-free, you’ll definitely want to start putting some money aside for taxes, just in case. If some of your debt is forgiven and you can’t afford your tax bill right away, the IRS will begin charging you interest and fees.

What are your other options?

It’s crucial to recognize that the $10,000 and $50,000 loan forgiveness proposals apply only to federal student loans, not the private loans obtained from banks and other nongovernment lenders.

So if you have a private loan — or if you don’t think Biden and his supporters will get their way — you’ll have to pursue other options.

Interest rates on private student loans have dropped big-time during the pandemic. So, borrowers with either private or federal loans might want to consider refinancing — that is, trading an old loan for a new one at a much lower interest rate and with lower monthly payments.

Switching from a federal student loan to a private one would make you ineligible for any government relief in the coming months. That could be a tough call to make.

But there’s no downside if you already have a private loan. Refinancing now while rates are cheap could significantly reduce your payments, saving you thousands over time and allowing you to pay off the balance years sooner.

Analysts warn of ‚institutional exhaustion‘ with Bitcoin price back below $32K