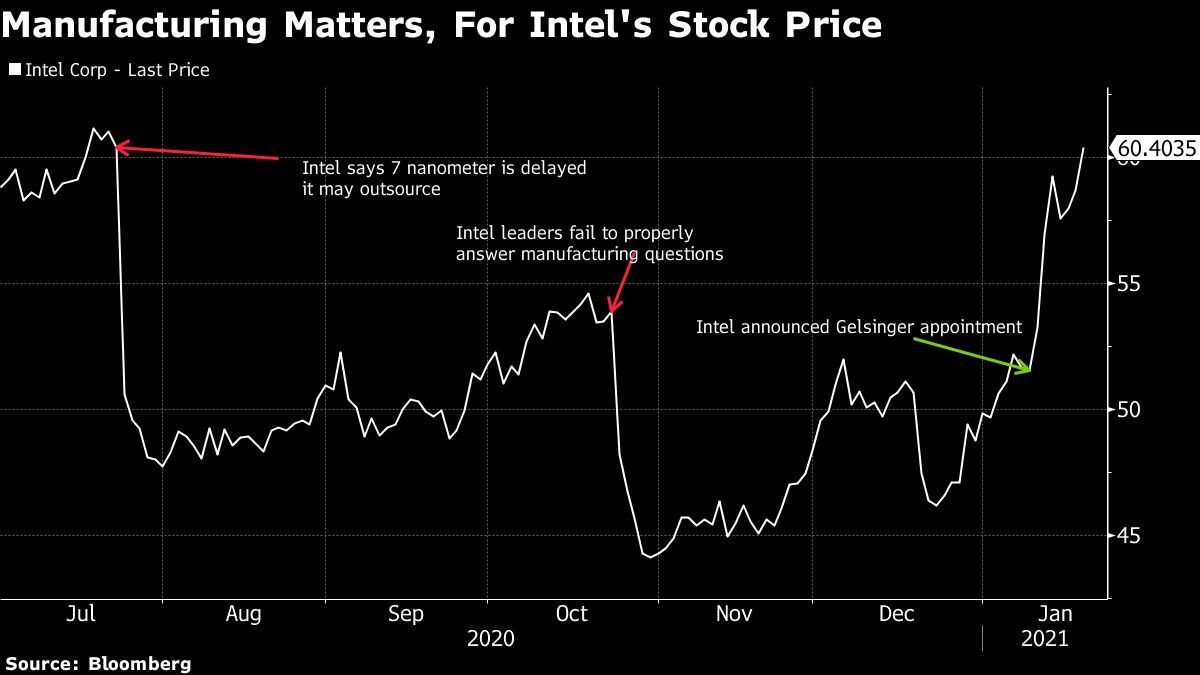 “I am confident that the majority of our 2023 products will be manufactured internally,” he said. “At the same time, given the breadth of our portfolio, it’s likely that we will expand our use of external foundries for certain technologies and products.”

He plans to provide more details after officially taking over the CEO role Feb. 15, however Gelsinger was clear that Intel is sticking with its once-mighty manufacturing operation.

“We’re not just interested in closing gaps,” he told analysts on a conference call Thursday. “We’re interested in resuming that position as the unquestioned leader in process technology.”

Keeping production in-house may be bad for Intel because its manufacturing technology has fallen behind Taiwan Semiconductor Manufacturing Co., which makes chips for many of Intel’s rivals. If the U.S. company can’t catch up, its products will become less competitive and it could lose sales and market share.

Activist Dan Loeb has suggested the company consider spinning off its manufacturing business. Other investors have been waiting to see if Intel will outsource more production. Intel shares fell almost 5% in extended trading, giving away most of the gains made earlier on a strong earnings announcement.

“Where investors are going to be disappointed is that some were expecting some sort of larger announcement of a strategic partnership with TSMC,” said Edward Jones & Co. analyst Logan Purk.

TSMC recently announced capital spending of as much as $28 billion for 2021 to maintain its lead. Purk said Intel would have to increase its own spending massively to try to catch the Asian company.

TSMC dropped as much as 3.6%, the most intraday since Aug. 20. Shares of some Intel suppliers also dropped, with Screen Holdings Co. down as much as 3.8% and Tokyo Electron Ltd. declined 1.4%.

Gelsinger is taking the reins of a company in the midst of its worst crisis in at least a decade. It has been the largest chipmaker for most of the past 30 years, dominating the $400 billion industry by making the best designs in its own cutting-edge factories. Most other U.S. chip companies shut or sold plants and tapped other firms to make the components. Intel held out, arguing that doing both improved each side of its operations and created better semiconductors.

That strategy has crumbled in recent years as Intel struggled to introduce new production techniques on time. It is now lagging behind TSMC and Samsung Electronics Co., which make chips for Intel competitors, such as Advanced Micro Devices Inc., and big Intel customers including Amazon.com Inc. and Apple Inc.

Intel’s quarterly results, released before the market closed on Thursday, sent the shares higher in New York earlier on Thursday. A hacker accessed sensitive information from Intel’s website, prompting the company to report the numbers earlier than planned.

Revenue in the period ending in March will be about $17.5 billion, the Santa Clara, California-based company said. This excludes the memory chip division Intel is selling. Analysts were looking for $16.2 billion on average, according to data compiled by Bloomberg.

Intel sees strong demand for laptops through the first half of the year, Chief Financial Officer George Davis said in an interview. Earnings in the second part of the year will partly depend on whether corporations increase spending on new hardware, he added.

“The question is will we see support from enterprise,” he said. “They’ve been very quiet.”

In its PC business, Intel reported a 30% surge in laptop chip sales, even as average selling prices declined 15%.

Intel’s gross margin, the percentage of revenue remaining after deducting the cost of production, was 56.8%. This is a key indicator of the strength of its manufacturing and product pricing. Intel has historically delivered margins of about 60%.

(Updates with shares in ninth paragraph.)