Meet the Redditors behind the GameStop saga 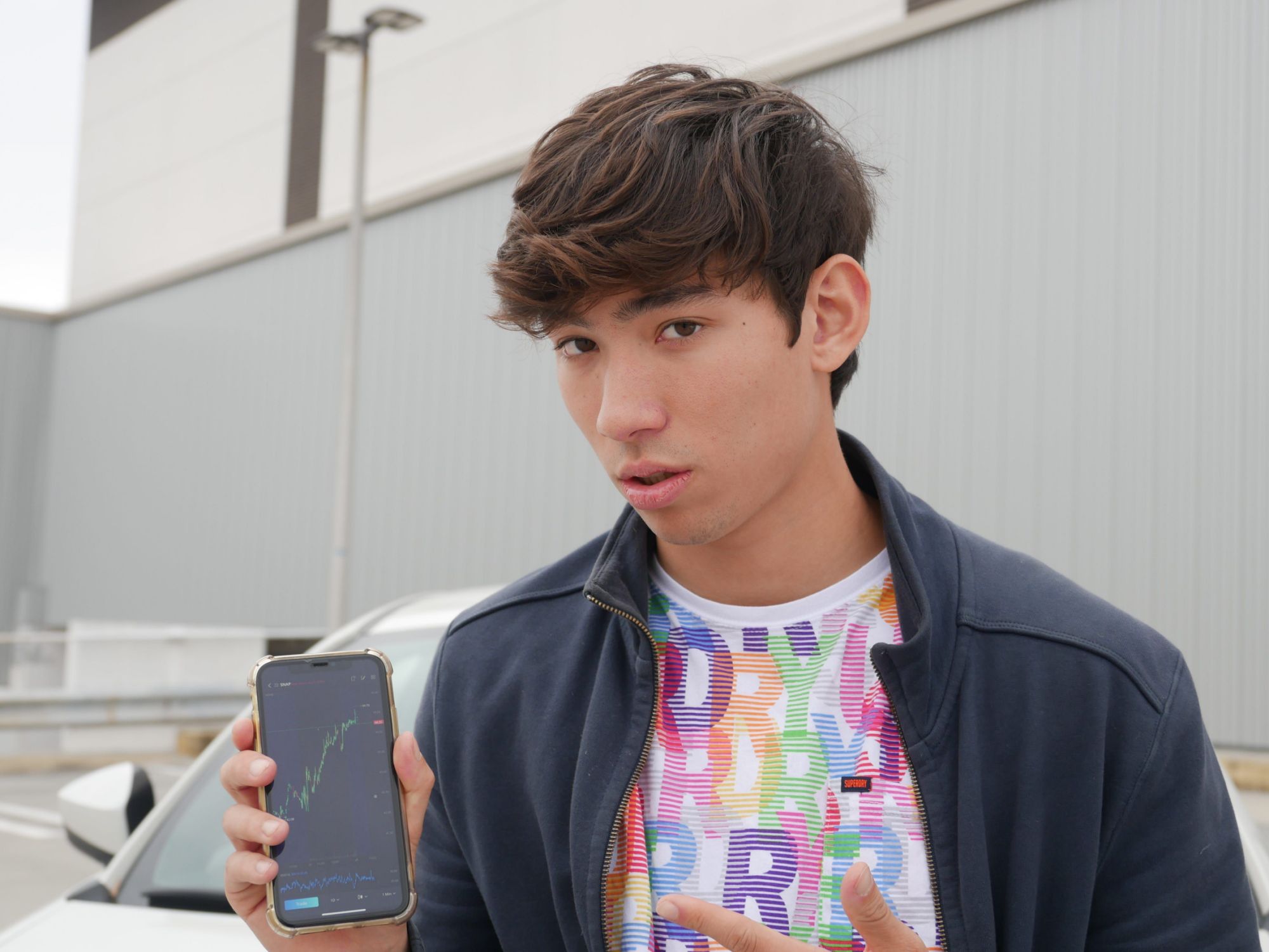 “This is life-changing,” says May, 19, who is a freshman at Loyola Marymount University in Los Angeles. “I was euphoric. I’ve never seen more than five digits in my bank account.”

In another part of the country, Roger Lin, a senior at the University of Utah in Salt Lake City, has been waking up before dawn to check in on GameStop and AMC Entertainment before the opening bell after he saw violent swings in his TD Ameritrade account.

A fight is raging in the stock market: Should you worry about your 401(k)?

“I haven’t gotten too much sleep. I’ve never done anything like this before,” says Lin, 21, who put $30,000 in AMC options last Monday and bought 35 shares of GameStop in the frenzy.

Lin, who works as a purchaser for a food distribution company, said his brokerage account peaked at nearly $280,000.

“Zoom classes have made it very easy for me to monitor the stocks all day,” Lin adds.

Both May and Lin are members of the r/WallStreetBets Reddit community that’s taken Wall Street by storm, spurring a fight in the markets between amateur and hedge fund investors over stocks like GameStop and AMC.

Reddit users in the forum took matters into their own hands after hedge funds began unloading the struggling retailer’s stock through a process known as “short selling,” where investors borrow a share and sell it in hopes of buying it back later at a lower price and then pocketing the difference.

Redditors were drawn to GameStop stock after the company named three new directors to its board on Jan. 11 to help speed its turnaround, including a co-founder of online pet-supply retailer Chewy. But hedge funds, including Citron Capital and Melvin Capital, had shorted the stock. Short-seller Citron Research later posted a YouTube video, highlighting the downside potential for GameStop and it had published short-selling research.

So small-pocketed investors used the social media platform to drive up the stock prices for shares like GameStop, AMC and several other stocks. Since then, Citron Research said it will no longer publish short-selling research.

“It’s the perfect combination of market geniuses and pure degenerate gamblers,” May says of the group. “Lots of people share really smart trade ideas and share them to ‚WallStreetBets‘ because these people truly want to help other people make money.”

GameStop surged 400% last week, with shares rallying 1,625% for the year through Friday. The video-game retailer finished last week with a market value of nearly $23 billion, up from less than $5 billion a week earlier. On Thursday, the stock soared as high as $483, up from $18 just a few weeks ago.

The wild swings continued in recent days, with GameStop losing ground this week. The stock plummeted 50% Tuesday following a 30% drop Monday, with shares shedding more than half of their value in two days.

Several brokerages, including popular retail investment app Robinhood, temporarily blocked investors from buying those shares, angering small investors and sparking outcry from leaders on both sides of the aisle in Washington, with a rare moment of bipartisanship on social media between Rep. Alexandria Ocasio-Cortez, D-N.Y., and Sen. Ted Cruz, R-Texas.

Now the Securities and Exchange Commission has jumped into the mix, saying it’s „closely monitoring and evaluating“ the situation and „will work to protect investors“ and fair markets.

“The system seems unfair. They’re trying to change the rules of the game just because the big guys are losing money,” Lin argues. “By restricting buying, you’re going to cause a little panic for retail investors. It’s hurting the little guy.”

The r/WallStreetBets community has been around since 2012. It started the year with just over 1 million users. By Friday, it hit 6 million.

“What gets people’s attention are the stories on how much money someone made,” says Thomas Martin, senior portfolio manager at Atlanta-based GLOBALT Investments. “It captures people’s imaginations and also makes them ask ‘why is everybody else getting rich and not me?’ So they try to play.”

For those small investors, it’s important to know where they stand in the spectrum of the herd before it turns and it’s too late.

„The people who will make the most money are the ones who made the first moves and determined when to buy and sell,“ Martin adds. „If more people join the forum and want to be the leaders, it will splinter and it won’t work as well.”

The drama has left investors on edge waiting to see how all of this will unfold in the coming days and weeks.

To be sure, while some small-time investors who have speculated on shares of GameStop and AMC may cash in hefty returns, it’s only a matter of time before the prices of these stocks collapse and a reckoning occurs for the investors who own them, experts say.

Some retail investors who have jobs and paychecks have poured money into the stock market. Their disposable income and savings have risen during the coronavirus pandemic because they’re put off vacations and other large expenses, Ed Clissold, the chief U.S. strategist at Ned Davis Research, explains.

“People feel like they’re playing with house money. That mentality leads to a gambling type of attitude, but if you go to the casino enough, eventually the house takes the money,” says Clissold. “That’s what is a little worrisome here. Some individuals will do great, but the little guy usually loses.”

“While some of the hedge funds didn’t know what was going on last week, now they know who’s doing it and how, so the element of surprise has dissipated,” Stovall says.

“What might end up happening is the retail investor will shoot themselves in the foot,” Stovall adds. “I worry that everyone who thinks they will make some money on GameStop will be the last buyers and will end up holding the bag after getting caught up in the euphoria of the trade.”

Linon Rorie, who works in room service at a hotel in Austin, Texas, has been on the losing side before with cryptocurrencies. But the notion that small investors are leading a rebellion against hedge funds on Wall Street pushed him to take a risk and buy GameStop shares.

“It’s become a big movement. People lost their whole livelihoods in the financial crisis. Now they are fighting back,” says Rorie, 23, who sold off all of his other positions to invest in GameStop shares.

The situation has hit a fever pitch where swarms of small investors see themselves fighting the 1%.

“The little guys and underdogs are going against hedge funds,“ Rorie says. „That made me buy even more shares of GameStop than I initially planned.“

Rorie had taken time off from work recently and jumped back into trading as a distraction after his mother passed away in December. Once Rorie is ready to cash out, he wants to give some of the funds to his siblings and father who are struggling financially during the pandemic, he says.

Others have GameStop FOMO

Following the Reddit hype, Julie Hembeck, a physics and math tutor in Huntingtown, Maryland, scooped up one share of GameStop on Wednesday, knowing that she could lose money. She ended up selling it Thursday after online brokerages restricted trades and she instead bought shares of Nokia after seeing it discussed on Reddit.

“I knew it was a gamble, but I did it for fun,” says Hembeck, who uses brokerage firm E-Trade for her trades. “It gives me something to do when I’m stuck inside during a pandemic.”

After missing out on the stock market rebound last year because she was fearful following the downturn, she hopes to make more money from her recent trades to put into her Roth IRA. She stopped investing in it in the spring when the economy shut down, but started contributing money to it in the summer once the market was rising to records.

“The idea of making a large profit in a short time is appealing,” Hembeck says. “I’m taking a risk with a portion of my money to see if I can grow my portfolio faster.”

Despite GameStop’s meteoric rise and stomach-churning fall at times, some investors are dead set on holding their positions in hopes they could make even more money.

“The movements are so violent that it’s hard to watch the money drop,” says May, who wants to eventually invest more into the stock market and real estate, then stash the bulk of his money in a retirement account once this passes.

“A part of me wants to cash in and walk away, but another part of me knows this isn’t done,” May adds. “I’d regret getting out before really big moves are made.”

Lin also plans to also keep holding his current positions. His investment hit a high of $277,000 midweek, then on Thursday, it dropped to $80,000 when trading platforms like Robinhood, TD Ameritrade and Interactive Brokers restricted buying shares on high-flying stocks like GameStop and AMC.

By Friday, his account was sitting at $138,000 after Robinhood said it would resume limited trading in previously restricted shares.

“This investment is either going to zero or a million dollars. So I’m going to keep holding,” says Lin, who wants to use part of his funds to help pay for his younger sister’s college tuition once she graduates from a high school a year from now.

Rorie thought about selling as well but decided against it after Keith Gill, the investor who led the online community on Reddit to buy stock in GameStop, is thought to be still holding his position.

“If DeepF—ingValue is still holding the line, then I will, too,” says Rorie. “This is more money than I’ve ever seen. If I sell now, I’ll regret it for the rest of my life.”