Mining Gets Its Moment Under the Sun 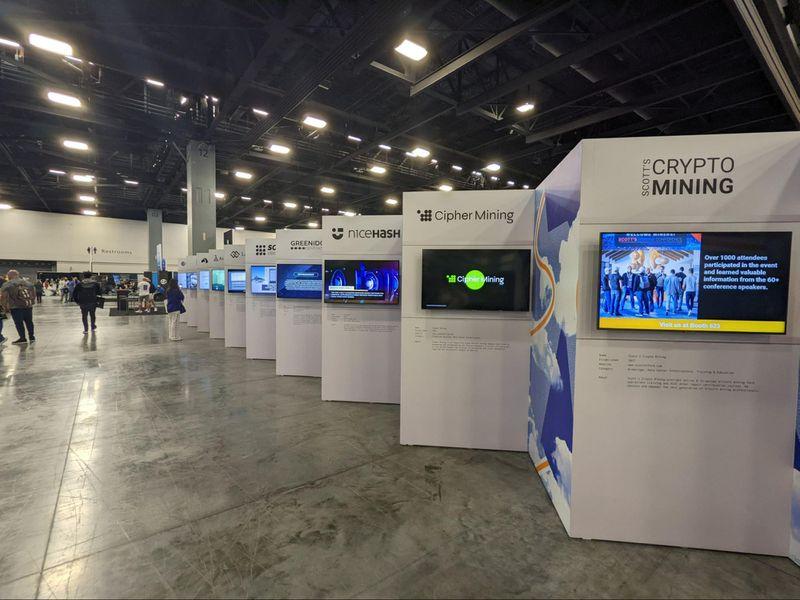 For the mining industry, Bitcoin 2022 in Miami was a moment to take center stage after spending previous conferences more in the shadows. The sector took over almost half the exhibition space at the show and there were plenty of lively discussions on mining with packed audiences.

Throughout the week, new mining rigs were unveiled, long lines of visitors were seen at the booths of mining services firms and some of the larger mining companies said they had their people sniffing around for deals.

In addition, Wall Street investment firms and financial institutions such as B. Riley, HC Wainwright and BNY Mellon hosted events to schmooze with miners, and the week’s mining parties were buzzing with attendees from pools to venture capitalists. There were even some deals that were announced during the week, including Applied Blockchains’s filing for a mining IPO and Core Scientific’s (CORZ) $75-million debt transaction.

A buzz around mining

“Last year, it wasn’t that [mining] was an afterthought, but it didn’t have nearly the pull or the promotion from the conference,” Whit Gibbs, the founder and CEO of bitcoin mining and services company, Compass Mining, told CoinDesk from the exhibition floor. “And this year…they promoted [the mining stage], they’ve got speakers that are more engaging, drawing in the crowds. It’s been great,” he said.

Compass Mining’s booth was abuzz with conference goers, with Gibbs having to pause our interview several times to greet them — a common occurrence at many mining-related company booths this year.

And there were plenty of them, including the top three mining rig makers, at least four providers of immersion cooling, three to four energy services providers marketing their environmentally-friendly solutions and three miners serving retail clients. There were also several other new mining rig manufacturers on the floor.

“Competition is going to make everything better for the consumers when it comes to mining services,” noted Compass’ Gibbs.

Interestingly, the actual mining companies themselves were noticeably absent from the exhibition floor.

They may have been too busy meeting with their Wall Street friends to raise capital, as there were a plethora of cocktail parties and private dinners bringing together the two sides throughout the week.

Meanwhile, larger miners, such as Hive Blockchain (HIVE), had its own team scouring the convention to look for deals, given that so many participants in the mining sector were present, Hive’s executive Chairman Frank Holmes told CoinDesk at the conference. “We’ve had many deals come to us,” Holmes said. “This is a real deal center.”

“This is a complete ecosystem; they are all here,” Holmes added.

Meanwhile, Bitmain showed off not only its mining rigs but also giant mobile Antbox containers that can hold up to 180 machines, sparing miners from having to create their own costly infrastructure. The company also displayed the latest version of these containers that allows for immersion cooling.

In addition, there were some lesser-known hardware providers at the conference, a sign that new entrants may be trying to break into the very competitive but potentially lucrative mining rig manufacturing industry.

“When it comes to the hardware side, there’s more of a presence from different providers than I’ve ever seen at a conference before,” Gibbs noted. However, Gibbs said he is “slightly apprehensive” of all the new entrants. “I think we have some people here that are promoting products which are not proven so it could pose a risk for people who are interested in buying them,” Gibbs observed.

Indeed, a recent CoinDesk investigation found that NuMiner, a previously unknown company that created a stir by claiming to have created a bitcoin mining rig far superior to the industry standard, ultimately couldn’t back up almost all of the claims it initially made.