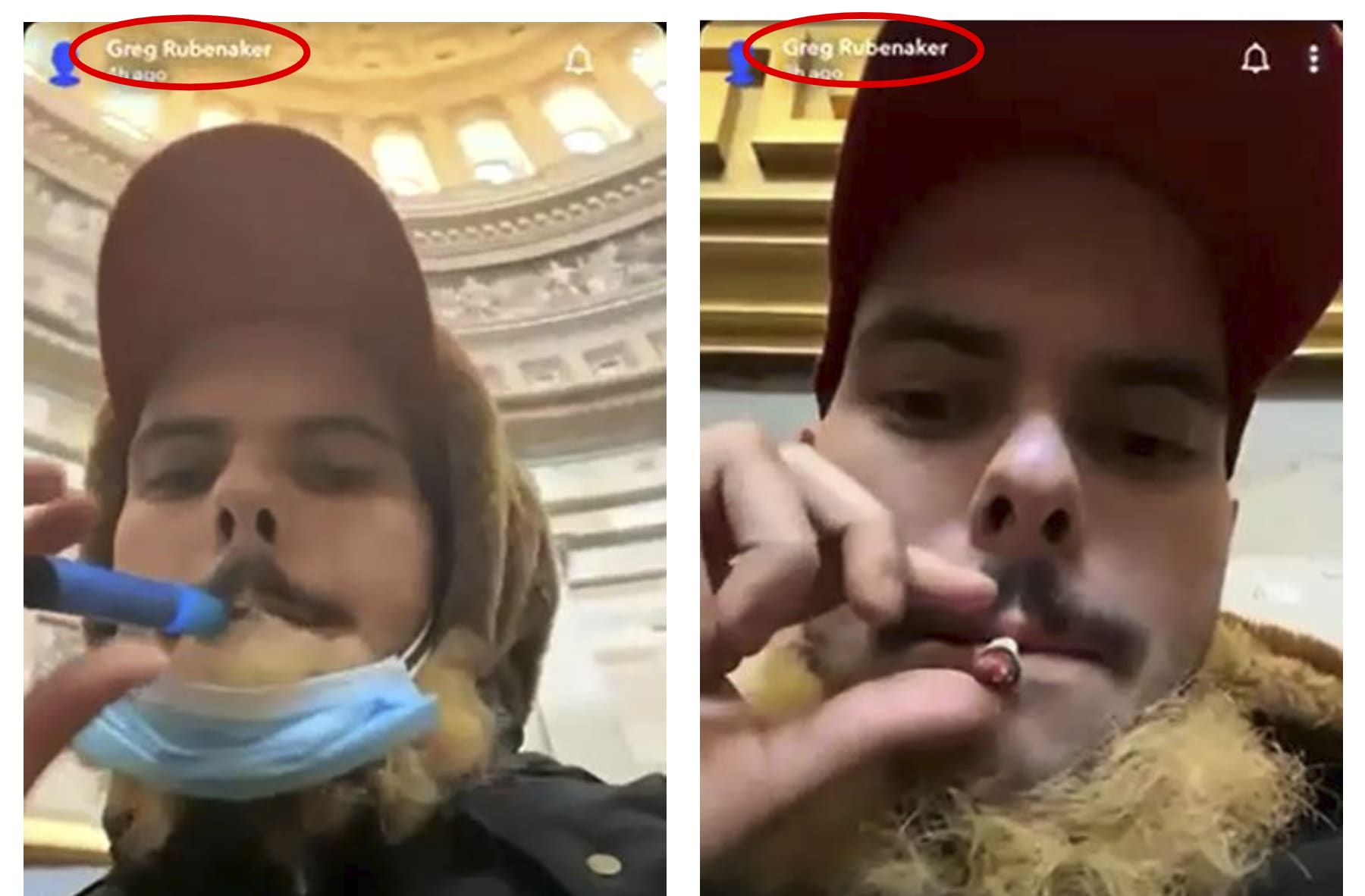 A New York DJ was arrested Tuesday after the FBI said he was seen on a Snapchat video smoking what appears to be marijuana in the U.S. Capitol rotunda during the Jan. 6 riot by supporters of then-President Donald Trump.

„Holy s—! This is history! We took the Capitol!“ a man believed to be that DJ, Greg Rubenacker, said on a Snapchat video posted by Rubenacker’s account during the invasion, according to a criminal complaint filed by federal prosecutors.

„Smoke out the Capitol, baby,“ Rubenacker is seen saying while facing a camera on a subsequent video, while „smoking what appears to be a marijuana cigarette (or ‚joint‘)“ as he and other people who occupied the rotunda mill around, an FBI agent wrote in that complaint.

„Hell yeah,“ Rubenacker is seen saying before exhaling smoke into the rotunda after one of his fellow rioters says, „How many joints we have?“ the complaint says.

The filing says that a witness submitted a recording of the Snapchat story that Rubenacker posted from his account.

The complaint contains still images of Rubenacker smoking what appears to be a joint and smoking a blue vaping device.

„In an interview with the FBI, the witness explained that it watched the Snapchat story and knew the individual depicted throughout the videos to be Greg Rubenacker of New York,“ the filing said.

„The witness stated [they] had known Rubenacker for multiple years and had attended school with Rubenacker.“

Rubenacker, who lives in Farmingdale, Long Island, appeared via videoconference in U.S. District Court in Central Islip, New York, on Tuesday afternoon to face misdemeanor charges related to disorderly conduct at the Capitol and to demonstrating in a Capitol building.

Rubenacker was admonished several times by his own criminal defense lawyer to stop talking during a break in the hearing, when both of them could still be heard on a telephone line open to reporters.

„It’s really frustrating,“ Rubenacker said at one point. „Tired of the corruption in the government.“

His lawyer, Michaelangelo Matera, chided him, saying, „Now’s not the time to talk about the case.“

He later asked Magistrate Judge Steven Locke, „Can I take off my mask?“ Locke, noting that there were other people in a room with him, denied that request.

When Locke went through a series of conditions that Rubernacker would have to abide by when he was released on a $50,000 unsecured bond, the defendant said, „Is there any way I can get a list of this written down?“

„My memory’s not too good. You’re saying a lot,“ Rubenacker added.

Locke assured him that he would be getting the release conditions in writing.

The case against Rubenacker was filed in federal court in Washington, as are other criminal cases against dozens of others charged in the riot, which led to five deaths, including of a Capitol Police officer.

Future proceedings in the case will be held in Washington.

A woman who answered the phone at Rubenacker’s residence hung up on a CNBC reporter when she was asked for comment.

Rubenacker’s arraignment occured during the opening arguments of Trump’s second impeachment trial in the Senate.

Trump was impeached by the House of Representatives last month on a charge of inciting the riot by his supporters.

Shortly before the violence began outside and in the Capitol complex, Trump urged a large crowd gathered outside the White House for a rally to help him fight to get Congress to effectively overturn the election of Joe Biden as president.

The riot disrupted an ongoing joint session of Congress that was formally confirming Biden’s victory.

Trump for months refused to concede that he lost the election to Biden and made baseless claims that he had himself won the election and that widespread ballot fraud swindled him out of that victory.

Virtual land can be worth more than the real thing after plot sells for record $1.5M