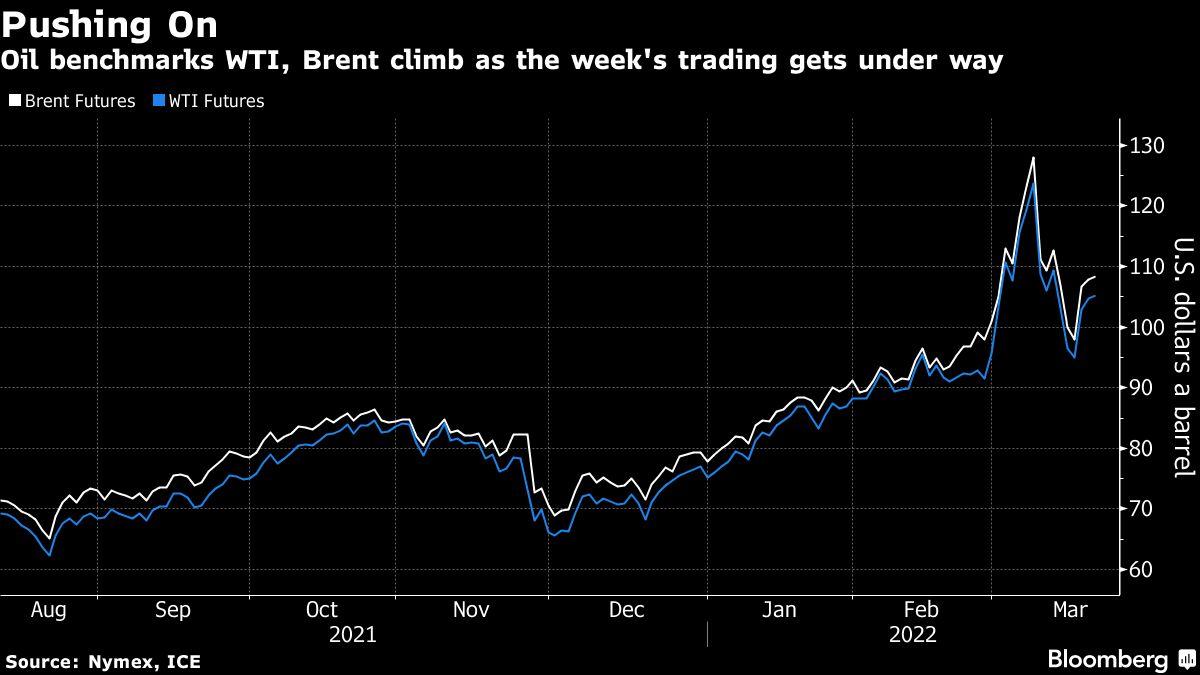 (Bloomberg) — Oil rose for a third straight day as the war in Ukraine neared the end of its first month with no end in sight, and Iranian-backed rebels attacked energy facilities in key exporter Saudi Arabia.

West Texas Intermediate climbed above $108 a barrel, and the U.S. benchmark has now rallied almost 14% since the close last Wednesday. Turkey said Moscow and Kyiv were moving closer in talks to achieve a cease-fire. Still, a top Ukrainian aide said that Russia has turned to “more destructive artillery.”

The global oil market has been pitched into turmoil by Russia’s invasion of Ukraine, with the U.S. and Europe imposing sanctions on Moscow and crude buyers shunning the country’s cargoes. WTI topped $130 a barrel earlier this month to hit the highest since 2008, before easing. Prices have seen unprecedented volatility, with frequent intraday swings of about $10.

In the Middle East, Yemen’s Houthi rebels attacked at least six sites across Saudi Arabia late Saturday and early Sunday, including some run by oil giant Saudi Aramco. The Iran-backed group targeted a fuel depot in Jazan in the southwest of the kingdom and a natural gas plant in the Red Sea city of Yanbu.

The Biden administration is stepping up its response to Russia’s invasion. Later Monday, officials will brief energy companies including Exxon Mobil Corp. as well as banks on the war and ensuing sanctions. Separately, President Joe Biden will call counterparts in Europe, then travel to the region later this week.

The jump in prices has prompted leading importers to pressure producers to step up supply, including members of the Organization of Petroleum Exporting Countries. At the weekend, Japan urged the United Arab Emirates to increase exports. Meanwhile, Saudi Aramco will increase spending as oil’s surge bolsters its plan to boost output.

Traders are also tracking China’s efforts to contain its latest Covid-19 outbreak and the implications for energy demand. President Xi Jinping has pledged to reduce the economic impact of strict containment measures, while reiterating a commitment to a Covid-Zero policy. Last week, China reported its first Covid-19 deaths since January 2021 and new infections in Shanghai hit a record.

“The volatility is settling down quite a bit,” said Stephen Innes, managing partner at SPI Asset Management Pte. The supply risk is nowhere near as bad as once thought, China’s Covid-19 strategy is still a bit uncertain, and the market is keeping an eye on whether OPEC will boost production, he said, adding: “There is quite a lot of stuff to digest.”

Futures are in backwardation, a bullish pattern with near-term prices above those further out. Brent’s prompt spread — the gap between its two nearest contracts — was $3 a barrel in backwardation, up from $2.86 on Friday.