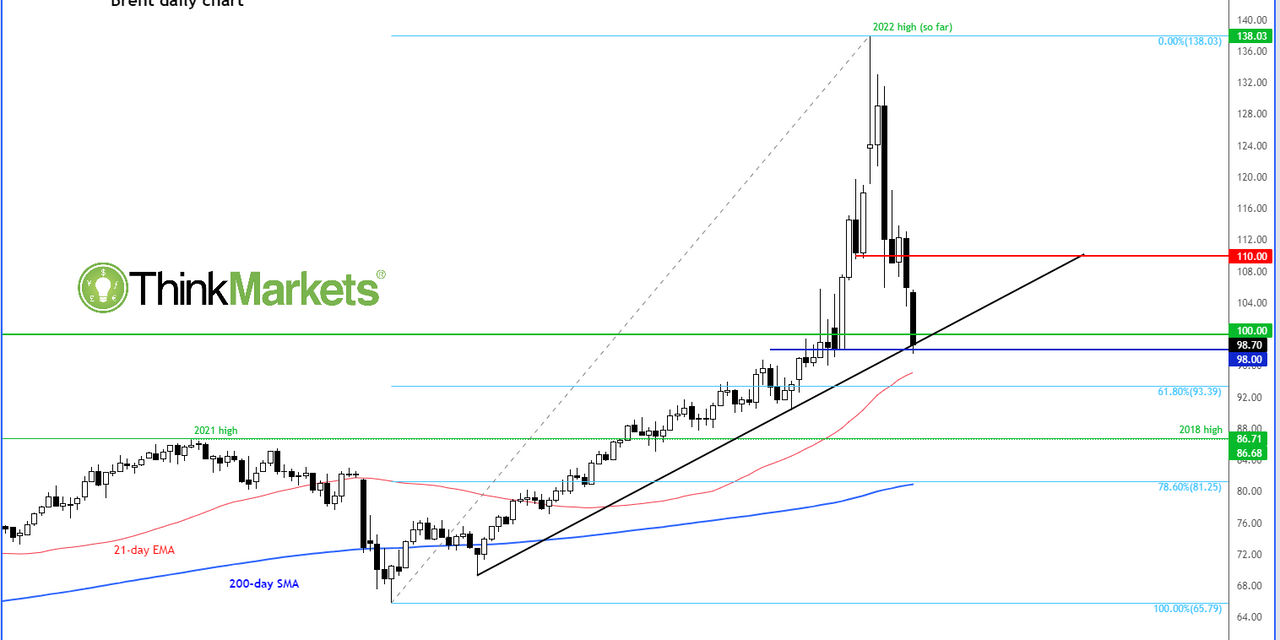 “The collapse has been spectacular,” Fawad Razaqzada, market analyst at ThinkMarkets, in a market update.

A bear market is technically usually marked by a drop of 20% or more from a recent high and if WTI settles at $98.96 or lower, and Brent at $102.38 or lower, according to Dow Jones Market Data, both would enter a bear market.

The biggest driver behind the selloff in oil has been “investor realisation that Europe is not going to wean off Russian oil supply immediately,” said Razaqzada. “Everything else is secondary, including the potential return of Iranian oil supply.”

Iran and world powers have been trying to negotiate a deal to revive the 2015 nuclear deal, which was aimed at limiting Iran’s nuclear activities. A deal would likely lift some U.S. sanctions on Iran, allowing it to contribute more oil to the world market.

Russia’s Foreign Minister Sergei Lavrov told his Iranian counterpart Tuesday that negotiations on reviving the deal were nearing an end, according to Reuters.

Meanwhile, the Organization of the Petroleum Exporting Countries has “highlighted the risk to the oil demand outlook arising from the Ukraine war and surging inflation,” he said.

In its monthly report released Tuesday, the group of major oil producers said it was leaving its economic forecasts and its estimates of 2022 crude-oil demand and supply growth “under assessment.” It warned that inflation stocked by the Russia-Ukraine war could undercut oil consumption.

“Also weighing on oil prices is something that had sent prices into the negative last year: surging COVID cases and lockdowns,” said Razaqzada. “This time in China, the biggest oil importer in the world.”

China’s southeastern manufacturing hub of Shenzhen, near Hong Kong, has been locked down due to a COVID outbreak, in addition to a COVID lockdown in the northeast of the country.

For now, however, Russia’s continued invasion of Ukraine is “likely to cause more disruption to global trade, if not to energy exports directly,” Marshall Steeves, energy markets analyst at S&P Global Commodity Insights, told MarketWatch.

So “upside risk remains, and the current retracement [in prices] appears to be profit taking motivated by the Chinese demand concerns,” he said.

Given the sharp sell-off in oil prices, Razaqzada said the oil market may “see a bit of ‘bargain’ hunting at these levels, especially as the threat of Russian supply disruptions remain high.”

Still, “we need to see evidence of a rebound first, ideally on a daily closing basis, before bullish speculators start to dip their toes in,” he said.

How To Lower E-Commerce Cart Abandonment With ‘Cartalytics’

China says it wants to steer clear of U.S. sanctions over Russia's invasion of Ukraine