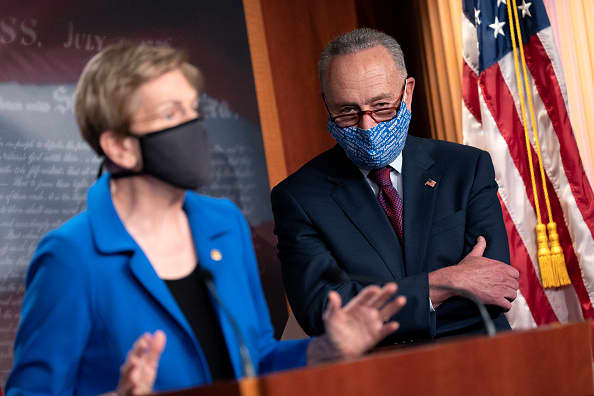 The people elected two leaders — President Biden and Vice President Harris — who committed to boosting our economy by cancelling billions of dollars in student loan debt. That commitment affects more older Americans than you might think.

Right now, over 43 million people in the United States are buried under $1.5 trillion dollars in federal student loan debt, including 6.3 million borrowers ages 50-64 and nearly a million borrowers over the age of 65 who may still be paying for a loved one’s education or for their own. They’ve carried that burden while the rich have gotten richer in the midst of this pandemic.

This isn’t right. And it’s no wonder so many Americans don’t think Washington works for them.

But the Biden-Harris administration can fix it. We are calling on President Biden and Vice President Harris to immediately cancel up to $50,000 in federal student loan debt. The U.S. Department of Education holds that debt and can cancel it, too. This is exactly what Joe Biden and Kamala Harris should direct their Education secretary to do.

The student debt burden for older Americans has grown at an alarming rate: According to the American Association of Retired Persons (AARP), in 2004 adults aged 50 and older accounted for $47 billion of student loan debt, but by 2018, that figure had skyrocketed to $289.5 billion. In fact, student debt is one of the biggest contributors to the rise in the amount of debt seniors hold overall. And like the massive debt burden on younger Americans, trying to balance this mountain of student debt inevitably drags our seniors down too.

This reduction in benefits is often not even enough to cover the ballooning interest payments, and the gains for the federal government are miniscule. In fact, more than 70% of garnished Social Security benefits were just going toward student loan fees and interest, and not paying down seniors‘ principal balances, leaving many seniors with a reduced standard of living just to stay stuck in a cycle of inescapable debt.

The results for seniors who rely on Social Security to put food on the table or keep a roof over their heads are devastating. That’s amoral and predatory, and it is not a federal government that’s working for older Americans.

Older Americans with student debt include people who may not have had a chance at a degree when they were younger because they had a family to support, but took a shot at the American dream and went to college later in life. Now their student debt eats away at the retirement security they worked so hard for.

It includes parents who made sacrifices by taking on a parent loan so their kid or dependent grandkid could receive an education and build a successful future. Now their hard-earned income and safety net for retirement is dwindling as their debt load outpaces interest. This is especially true for people living on a fixed income during retirement.

Whether they took on student debt for themselves or for a loved one, in both situations, they were told that education is the ticket to the American dream, which would inevitably lead to a financially secure retirement. But, that’s not the case for 37% of Americans over the age of 65 who are in default on their student loans, according to AARP.

Bottom line: the federal government has turned its back on Americans young and old with student loan debt. The system failed them, and today, they’re drowning in debt when they should be experiencing retirement security in their golden years. The debt burden undermines the federal safety net programs – like Social Security – created so that Americans could remain financially secure.

No older person should have to make life-altering decisions between paying their student loan payment, putting food on the table, or keeping themselves and their families safe and healthy, especially during this public health crisis. Older Americans shouldn’t have to limit daily meals so that they make a monthly payment. And they definitely shouldn’t have their hard-earned Social Security stripped from them.

Joe Biden and Kamala Harris can cancel up to $50,000 in student loan debt for our seniors, and we hope you’ll join us in urging them to do so.

Chuck Schumer, a Democrat of New York, is the Senate majority leader. Elizabeth Warren, a Democrat, represents Massachusetts in the Senate.