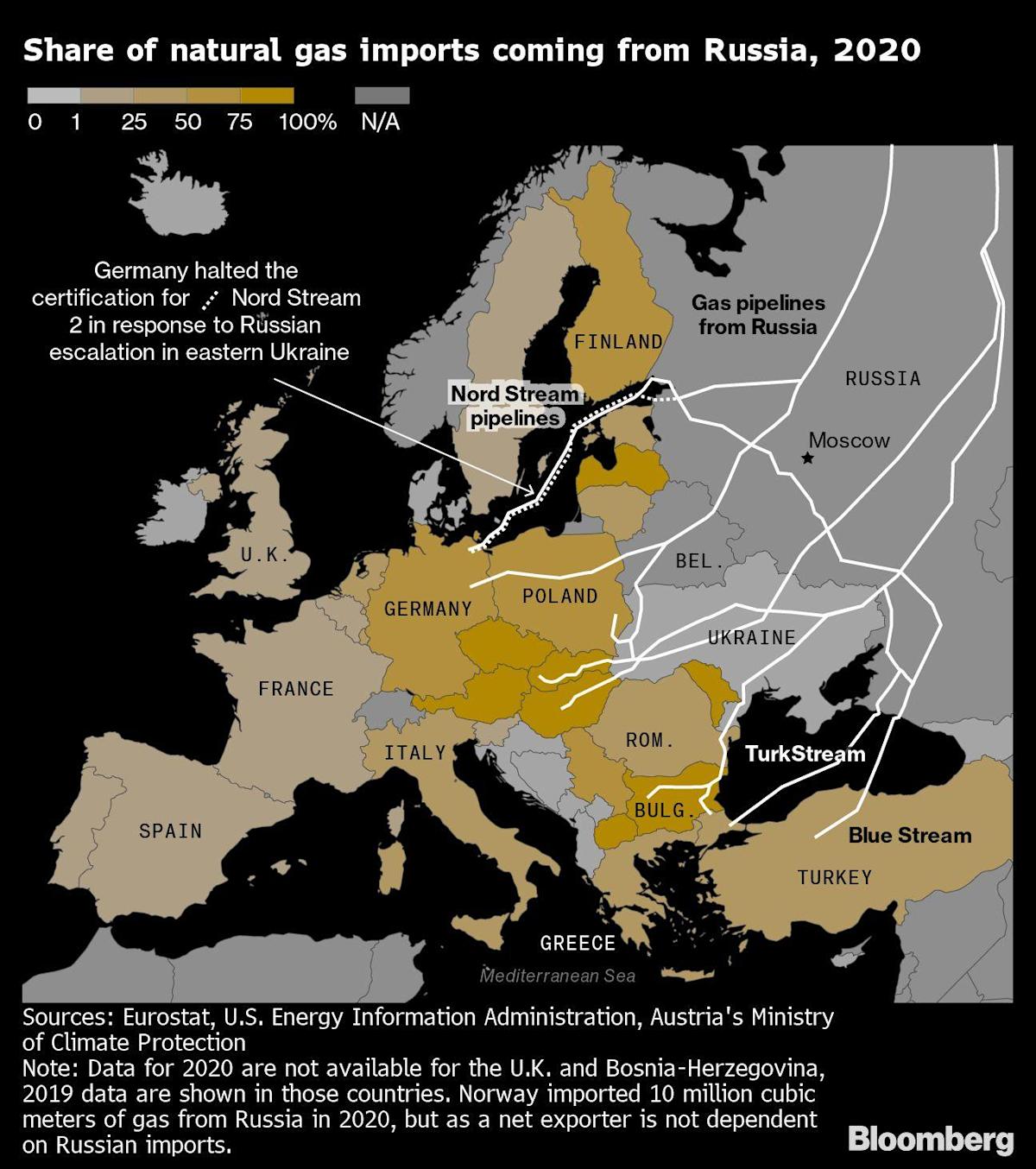 (Bloomberg) — The European Union and Russia are at risk of triggering a de facto embargo on Russian gas after the bloc’s lawyers drafted a preliminary finding that the mechanism President Vladimir Putin is demanding for payment in rubles would violate the bloc’s sanctions.

Countries including Germany are still scrutinizing an initial EU assessment that Putin’s ruble demand would breach the bloc’s sanctions imposed over Russia’s invasion of Ukraine. The Netherlands has told its energy firms to refuse the new payment system in light of the EU legal analysis.

Russia could still provide clarifications or adjustments to its decree that could affect how the EU and companies move forward. Moscow has been pulling in roughly 1 billion euros a day from Europe in energy purchases, which has helped insulate it from the impact of EU sanctions.

If Russia follows through on its threat to cut off gas supplies to buyers that don’t comply, it poses a serious threat for the EU, which gets 40% of its gas from Russia. The bloc is scrambling to find alternative energy sources as it comes to terms with the outsize leverage Moscow has over its security, but the transition will take time. The EU is working on its sixth sanctions package, but moves to target Russian energy have been fraught given the bloc’s dependence.

Germany could face a 220 billion-euro ($238 billion) hit to output over the next two years should the gas supply be cut immediately, according to a joint forecast of economic institutes. That’s the equivalent of a 6.5% annual output cut and it could tip the country into a recession of more than 2% next year.

On March 31, Putin issued a decree stipulating that “unfriendly” buyers of its gas open two accounts, one in a foreign currency and one in rubles, with Gazprombank. The Russian bank would convert the foreign currency payments into rubles before transferring the payment to Gazprom PJSC, the state-owned gas company.

A preliminary analysis by lawyers for the European Commission, the EU’s executive arm, found that payments using this system would violate the bloc’s sanctions, according to a person familiar with the matter. Lawyers for the European Council, the institution composed of the leaders of the 27 member states, concurred with the commission’s assessment, another person said.

The commission relayed the analysis to member states this week, adding that governments would need to inform the 150 companies that hold gas contracts with Russia, the person said. The EU also said it plans to provide further guidance on the situation to aid countries and companies.

The Netherlands this week told its companies to refuse the new gas-payment terms being demanded by Russia. “The Dutch government agrees with the conclusion of the European Commission,” a spokesperson for the Dutch Ministry of Economic Affairs and Climate Policy told Bloomberg. “This means it’s not allowed for Dutch companies to agree with these terms.”

Gazprom’s gas exports to the Netherlands are relatively low by regional standards, with supplies to the country representing only about 4% of the Russian gas giant’s shipments to the EU and Turkey in the first half of last year.

German Economy Minister Robert Habeck acknowledged the commission report to Politico, adding, “We cannot allow any circumvention of the sanctions through back doors.” He didn’t, however, say if his government agreed with the assessment, nor did he elaborate on what action Germany would take.

Germany is particularly exposed, since half of its gas and coal comes from Russia.

The commission is working on a sixth sanctions package that could include restrictions on some oil imports and goods, according to a person familiar with the work, but member states including Germany, Austria and Hungary have expressed reservations on a full embargo. Even then, it’s unlikely the commission will present anything concrete until after the second round of the French election on April 24, two separate officials said.