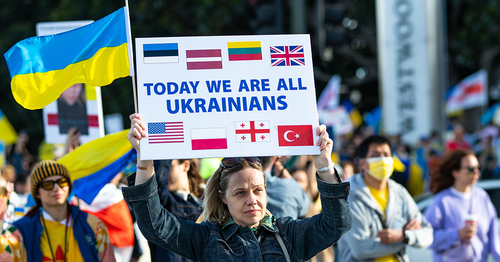 The Russian invasion of Ukraine has united much of the world in a common purpose to make the war as painful as possible economically for Russia. Sanctions are the weapon of choice.

The European Union, whose 27 members stand to suffer most from economic penalties against Russia, just passed its fourth package of sanctions in mid-March targeting 15 additional individuals—including oligarch Roman Abramovich—and nine entities, Rosneft and Gazprom Neft among them. In addition, the European Commission, France, Germany, Italy, the US, the UK and Canada also recently announced the Russian Elites, Proxies and Oligarchs (REPO) task force to coordinate international sanction policies, the seizure of assets and moves to counter efforts by oligarchs to evade enforcement.

Sanction regimes have rarely been so broad and widely supported across so much of the world. “The coordination we’re seeing on these actions is among the most impressive I’ve ever seen,” said Hagar Chemali who worked in the US Treasury Department during the Bush and Obama administrations on sanctions and counter-terrorism policy for 12 years and now hosts a foreign policy show on YouTube, Oh My World. “It’s difficult to get consensus from all 27 member states of the EU on anything, but with the Russia situation, there has been a proactive effort to have a united front.”

The sanctions employed are far more extensive than those enacted after Russia’s seizure of Crimea in 2014, said Chemali, a spokesperson at the Treasury Department when they were drafted. She said the policy then was cautious about limiting economic fallout on Europe and other nations, particularly in the oil and gas sector.

Not this time. The latest rounds of sanctions target several more Russian businesspeople and politicians along with businesses and state-owned enterprises. The sanction policies and general global outrage have also motivated global companies like oil giants BP and Shell to close operations and divest assets in Russia, putting further pressure on the Russian economy. “The sanctions now tighten the noose around Putin’s neck from every possible angle,” she said.

The economic impact of sanctions against Russia—the world’s eleventh-largest economy—will be significant and global. Commodity prices from wheat to metals to oil have all jumped since the invasion and businesses with substantial trade with the country will suffer. Moreover, if sanctions policy proliferates to include actions against countries that support Russia—most notably China—the economic pain could be far more significant.

“We have to be careful, particularly with China,” said Chemali. “The opportunity when a country like Russia is so integrated into international trade is that sanctions can have a real effect. The challenge is that there is no way to do it without some blowback. We haven’t seen the full economic effect of this yet.”

Will sanctions convince Russian President Vladimir Putin to abandon his war in Ukraine? Probably not.

“Sanctions are not a silver bullet. Nobody expects Putin to change his behavior solely because of them,” Chemali said.

They must be part of a broader strategy employing a mix of tools to help undermine Putin’s war machine, she added. “It always seems like sanctions don’t work, but they don’t work until they do.”

Hopefully for Ukrainians, that is sooner rather than later.

Portraits of war: See how the attack on Ukraine has affected its people