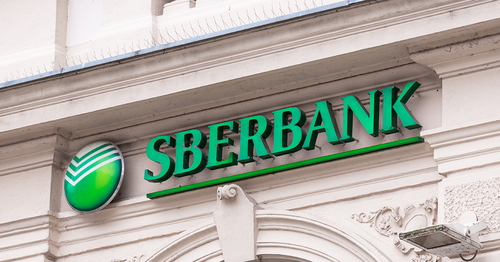 Inspired by prior experience being locked out of Western banking systems, the Russian bank’s defensive initiatives are paying off.

More than three months into the war in Ukraine, the European Commission (EC) has decided to cut off Russia’s largest bank, Sberbank, from the global financial messaging network, Swift.

Following a special European Council meeting on May 30, 2022, during which the Commission proposed a ban on 75% of Russian oil imports into the EU, increasing to 90% by the end of the year, EC President Ursula von der Layern announced the “de-Swifting” of Sberbank.

“Sberbank is the biggest Russian bank, with 37% of the Russian banking sector,” she noted. “So, this is good that we now de-Swift the Sberbank.”

The state-owned bank managed to dodge the first Swift ban on Russian banks, announced by the Commission on March 2, mainly because EU countries were still heavily dependent on Russian oil, gas and other raw material and did not want their payments blocked.

Despite not being part of the initial Swift ban—which removed seven Russian banks from the network—Sberbank became the subject of sanctions by some individual countries, including the UK and the US.

However, Sberbank has seemed to take the EC’s latest announcement in stride and recently posted on its Telegram social media channel that it is “working as usual” and that the main restrictions were already in place.

“Disconnection from Swift does not change the current situation in international settlements,” the bank announced. “Domestic transactions do not depend on Swift, and will be carried out by the bank in the standard mode.” Although foreign transactions using Sberbank Visa and Mastercard cards are blocked, some foreign countries accept Mir cards, an electronic funds transfer system set up by the Central Bank of the Russian Federation in 2017.

So, are the Swift sanctions having the desired effect? Russia had weathered the de-Swifting of key banks better than many expected. Many attribute that success to investments the country has made in payments and messaging systems since its annexation of Crimea in 2014, according to a June 1 note by the Institute of International Finance.

Since 2014, Russia has operated its System for the Transfer of Financial Messages (SPFS), which routes transactions between banks in Russia without using Swift’s infrastructure. Since the start of its “special military operation” in Ukraine, industry watchers believe that Russia has accelerated the implementation of SPFS as an alternative messaging platform to Swift.  An estimated 400 banks are believed to be connected to SPFS as of March 2018, while 23 foreign banks from Armenia, Belarus, Germany, Kazakhstan, Kyrgyzstan and Switzerland joined the system in 2020.

Russia is also looking for additional international partners to connect to the platform. The Indian government is considering a proposal to use SPFS for rupee-rouble-denominated payments. Meanwhile, there is talk of similar agreements with China, Iran and the Eurasian Economic Union.

Sberbank is not the first major bank to have been cut off from the global banking system, says Daniel Gutierrez, vice president and Regulatory Risk Manager at Ocean Bank in Miami and co-chair of the Legal & Regulatory Affairs committee at the Financial & International Business Association (FIBA).

“As an example, Venezuela’s Central Bank was added to the OFAC’s [Office of Foreign Asset Control’s] SDN [Specially Designated Nationals] list in April 2019, meaning no US bank could conduct business with it, transact for it or receive transactions from it,” he explains.

However, as soon as this became effective, OFAC also issued a series of General Licenses that permitted some activities, such as the winding down of certain business operations. Gutierrez notes the EU may have a similar plan regarding Sberbank.

To circumvent the latest action, businesses or individuals that have accounts with Sberbank may use other informal payment methods, like cryptocurrencies, or conduct transactions using banks in countries that have not applied similar sanctions to Russia.

“Foreign correspondent banking is a very complex product, which allows ’nesting‘ to occur in banks in countries with either poor AML [anti-money laundering] controls or regimes that may be friendly to Russia that let activity flow without their other correspondents down the stream seeing Sberbank in the transaction chain,” he adds.