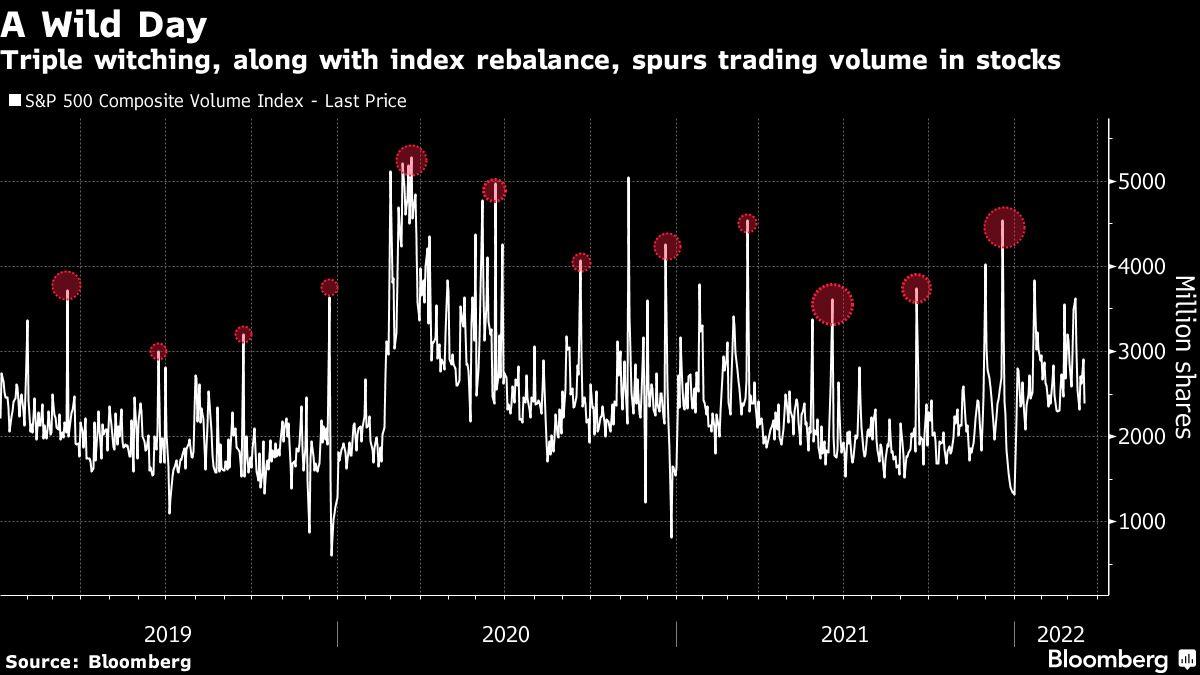 In a quarterly event known as triple witching, roughly $3.5 trillion of single-stock and index-level options are set to expire, according to Goldman Sachs Group Inc. At the same time, more near-the-money options are maturing than at any time since 2019 — suggesting a bevy of investors will actively trade around those positions.

And once again, this triple witching coincides with a rebalancing of benchmark indexes including the S&P 500 — a combination that tends to spark single-day volumes that rank among the highest of the year. According to an estimate from Howard Silverblatt, senior index analyst at S&P Dow Jones Indices, the rebalance in the index alone could spur $33 billion of stock trades.

Friday’s session lands just as the S&P 500 regains its footing with a three-day jump, buoyed by the Federal Reserve’s optimism the economy can withstand rate hikes and China’s promise to bolster its financial markets. Yet in the telling of derivatives pros, the rally has been fueled by dealers covering short positions to balance exposures while demand for stock hedges is elevated.

Now as many contracts expire, the key question is whether investors will rebuild their holdings of protective puts amid growth concerns and the war in Ukraine — or will they chase the market rebound with call contracts.

“I’ve never seen an environment where you’ve had so many potential overhangs in the market that can not be controlled,” said David Wagner, a portfolio manager at Aptus Capital Advisors. “We’ll see if people can see to redeploy their puts.”

The S&P 500 has climbed almost 6% over past three sessions in the best rally since 2020, as the likes of Marko Kolanovic at JPMorgan Chase & Co. urge investors to go all-in.

Exploding derivatives volume has been a fixture of the post-pandemic market — whipsawing underlying stocks in both directions, again and again. To strategists including Charlie McElligott at Nomura Holdings, this week’s advance in the S&P 500 has again been amplified by the hedging activity of market-makers.

It’s a complicated process, but it works roughly like this: When a dealer sells a put option, it’s essentially taking a bet on the underlying asset to go up. To offset this unwanted directional risk, the market-maker typically sells some of the asset to maintain a neutral position. When the put options expire or get exercised, it will reverse those hedging moves — potentially creating a tailwind for the asset.

Another factor involving dealers is their current “short gamma” or “short delta” position that requires them to go with prevailing market trends: Buy stocks when they go up and sell when they fall.

At the start of the week, their exposure on S&P 500 products sat at a level near the maximum “short gamma” relative to history, according to estimates by McElligott, a cross-asset strategist at Nomura. Three days later, that has turned into “zero gamma.” Along the way, dealers were forced to buy back stocks and close their short positions.

With market sentiment weak and institutional-fund exposure to equities near mutliyear lows, caution in the derivatives market is everywhere. The 20-day average of the Cboe put-call ratio for equities, for example, hovers near a two-year high.

“We see a general trend of continued risk aversion among investors, and expectations that the stock market remains volatile,” said Steve Sears, president at Options Solutions. “There are so many major events that could change the market’s tempo that hedging and patient fortitude appears to be the message from the options market.”

Options either far out of money or in the money receive less attention on Wall Street around expiration dates. Now with an unusually large number of S&P 500 contracts sitting close to the spot price this time round, trading activity on Friday looks set to be more frenetic than usual, according to Goldman strategist Rocky Fishman.

“The most interesting is options that are near the money, since as we approach expiration, there’s uncertainty about whether or not they end up in the money,” he said. “That uncertainty can lead investors to actively trade around those positions.”

With Putin's war in Europe, the legacy of Germany's Merkel is now being seen in a very different light