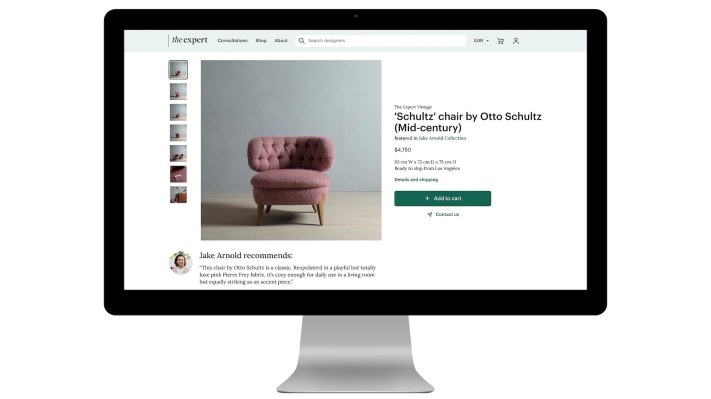 The Expert started out in 2021 as a way for anyone, regardless of budget, to get a one-hour video consultation with some of the top interior designers in the world. Now, buoyed by $12 million in Series A funding, the one-year-old company is expanding into e-commerce to become what co-founder Leo Seigal referred to as “Farfetch for home.”

We profiled the company when it launched with a $3 million round, with Seigal saying at the time, “We were able to attract a crazy roster of designers partly thanks to co-founder Jake Arnold (who styles the homes of Katy Perry and Chrissy Teigen), who is so highly regarded in the industry, and partly due to a timeliness of offering which is far above anything that has been tried in the home space.”

The Expert began with 60 designers, and a year later has over 140 designers advising thousands of clients across 50 countries. There are over 1,500 designers on the waitlist, with Seigal saying less than 1% become an “expert.”

Providing access to celebrity designers is an avenue other startups are taking, too. For example, Intro raised $10 million last year to power its app offering 15-minute consultations with the likes of Rachel Zoe and Nate Berkus.

Many of The Expert’s experts average 147,000 Instagram followers, which helped to drive 85% of organic traffic in 2021, he added. In addition, it drove 35% in repeat transactions and over $5 million in revenue in the first 12 months.

After realizing the spending potential of clients requesting the consultations — over 45% of the company’s clients had furnishing budgets of over $50,000, and 33% over $100,000, Seigal noted that the logical next step in The Expert’s road map was to expand into e-commerce to be a one-stop shop for home goods.

“Our clients wanted our designers to inform them how to spend their budgets, so we felt we were leaving money on the table by not having a way for them to purchase everything under one roof,” he added.

This new expansion, dubbed Showroom, will launch this summer with over 60 home brands, including Crate and Barrel, Apparatus, Schumacher and Waterworks.

Showroom is not only gathering trade brands, big box brands, new, custom and vintage under one roof — in some cases for the first time — but also providing the first direct-to-consumer sales channel and third-party sales channel for many of these partner vendors, Seigal said.

The new funding was led by First Round Capital with existing investor Forerunner Ventures participating along with Sweet Capital, Promus Ventures, Pentas Ventures, and a group of angel investors, including Jen Rubio, Jenny Fleiss, Liz Hamren, Neda Navab, Harry Hurst, Gwyneth Paltrow and Brigette Romanek. As part of the investment, Forerunner partner Nicole Johnson will join The Expert’s board of directors.

The Expert won’t be warehousing home good items, but will utilize a drop-ship method. It just hired its 16th employee and will be deploying the new funds into additional hiring, technology development and marketing. Seigal expects to double the employee headcount by the end of the year.

Next up, the company will be testing out a “The Expert Vintage” site that will feature revamped vintage furniture from Europe.