Topsort, an auction-based advertising startup, now valued at $110M after seed round – TechCrunch 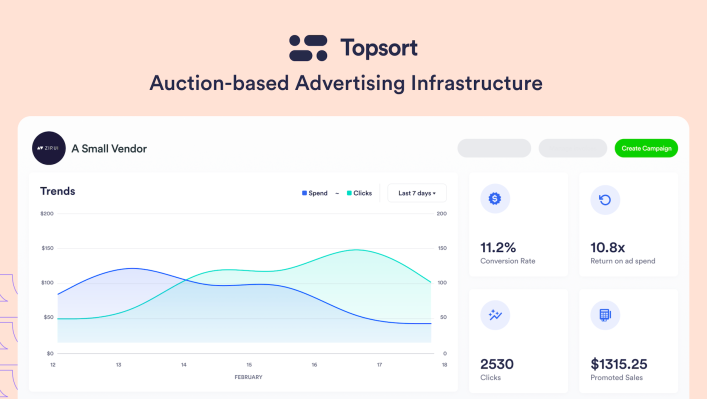 When Regina Ye was in college, she was a Shopify seller and recalls being so fed up with advertising solutions that she spent finals week staying up late to figure out how ads worked on Facebook and Amazon.

“It was super complicated,” she told TechCrunch. “I was an early adopter of B2B marketplaces, but advertising was this black box. I didn’t realize how much I would have to do this as a seller.”

There were two things that frustrated her: one was the complex structure of monetizing those channels effectively, and the other was the lack of direct promotional tools made available by the retail channels she was selling through, which she thought would be both less saturated and competitive than Facebook and Google.

During her time as product lead at Hopin Ye met Stanford professor Michael Ostrovsky, who is an expert in marketplace design and auction theory, and Francisco Larrain, a serial entrepreneur who had an early exit to Groupon and led its engineering.

As more marketplaces are affected by the shift to user privacy, the group took a look at how to innovate in this space without dealing with privacy. Exploring Ostrovsky’s work on auctions, together they started Topsort in 2021 to provide auction-based advertising technology, through APIs, so that smaller retailers and vendors could more easily promote without the reliance on cookies, which are poised to go away.

Their approach is retail media technology for small businesses to use auctions as a way to create effective advertising. When the user installs the API, they can start a campaign, including sponsored listings, banner ads and video ads, and are able to control how ads are shown, how ad quality and relevance are measured and who can launch campaigns. Larrain says the auctions run in as little as 20 milliseconds at 10,000 requests per second.

When considering how much to bid for clicks, Topsort provides suggestions using its proprietary algorithm to maximize clicks and conversions. It also has an auto-bidding feature for cost-per-click ads so that vendors can input a budget and time period, and the company will take it from there. Ye said it can guarantee between two times and four times in returns depending on the marketplace.

“I don’t agree that ads should be a guessing game,” Ye added. “This is very much a clean way of doing advertising, and we fill the gap with no privacy data, but math and machine learning. What sets us apart is how easy it is, which is why advertising technology has traditionally had a bad rep.”

Topsort has gained most of its customers in the past four months, and some of them are already bringing in $1 million to $15 billion in gross merchandise value.

One of its early customers is Babytuto, a parent and baby product retailer in Chile that initially worked with the company for Cyber Monday. Based on achieving a 40% vendor adoption rate, Topsort reported in its case study that “based on the vendor activity, the performance of this batch of sponsored listings, and the marketplace characteristics, our projection is that promoted listings on Babytuto will eventually generate additional profit equal to approximately 5% of their gross merchandise value.”

Ye says the company has learned a lot from Babytuto and its dozens of other early customers so far, including Yummy, Facily, Airlift and Chiper, and wants to accelerate growth and scale its go-to-market strategy.

Ye and Larrain say the new funding will go into growing a sales and marketing team and deepen the footprint Topsort has in Latin American and Asia.

“We are hitting a point where we have gone from zero to one, and all of the investors doubled down,” Ye said. “We’ve hit our customers in their ramp-up, but we would love to be there earlier. This area is so misunderstood, and we want to do more user education and come up with different ranges of products to also help smaller marketplaces get started as we work with all marketplaces at a different scale.”