Twitter today is introducing a new shopping feature called Twitter Shops, which will allow merchants to curate a collection of up to 50 products to showcase on their Twitter profile. The mobile-first feature, which is free to use, aims to encourage users to go from talking about products on Twitter’s platform to actually clicking through to browse the merchant’s selection, then check out.

However, unlike Instagram’s native Shops, these transactions aren’t taking place on Twitter itself. Instead, users first click the “View Shop” button above the merchant’s tweets to visit their shop. Then, when the customer is ready to make a purchase, they’ll click on the item to be redirected to the merchant’s website to complete the transaction. This experience takes place in an in-app browser, which is similar to how TikTok’s new shopping features work.

The feature is free to use and Twitter is not currently monetizing the new product while in testing, we’re told.

Twitter Shops build upon other efforts the company has made in e-commerce in recent months.

Last summer, Twitter began a U.S. e-commerce pilot that allowed users to browse products from a “Shop Module” at the top of the merchant’s profile. However, this module only offers up to five products for users to scroll through. The new Twitter Shops give the merchant the ability to feature a larger catalog, which they can upload via a CSV file.

The file can contain up to 10,000 products, including their name, description, pricing, and other details, allowing the merchant to easily rotate the selection of the 50 products showcased on their profile over time.

In addition to the Shop Modules, Twitter began testing a new live stream shopping platform last November, with Walmart as its first beta tester. Twitter says Walmart saw more than 2 million views during the livestreamed event, but it didn’t disclose to what extent that led to conversions. Live Shopping has since rolled out to other managed partners, including food delivery brand GoPuff and Samsung. 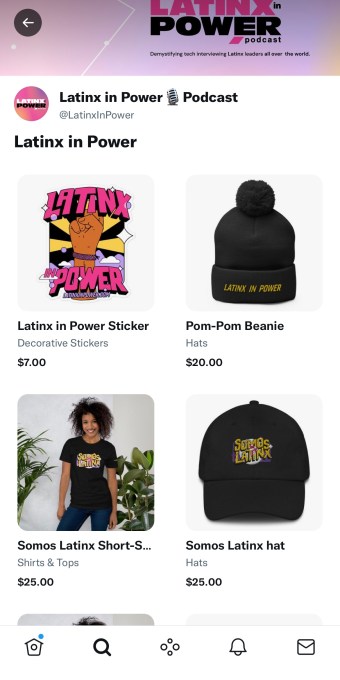 At launch, the Twitter Shops will be in beta testing in the U.S. in English with hundreds of brands including @Verizon, @ArdenCove, @LatinxInPower, @GayPrideApp, and @AllIDoIsCookUS. The company plans to recruit and onboard other merchants and managed partners as beta participants going forward.

The e-commerce expansion follows a period where Twitter has been rolling out new features at an almost ridiculously fast pace. Over the past year or so, Twitter has launched a set of creator tools (Super Follows), a subscription product for power users (Twitter Blue), newsletters (Revue), NFT avatars, in-app tipping, live audio (Twitter Spaces), and more. But there’s been some criticism that these efforts, which are focused on finding new ways to drive platform revenue, are distracting from the more critical work that needs to be done in areas related to the spread of misinformation and propaganda — areas that are more important than ever amid the Russia-Ukraine war.

Another challenge for Twitter’s e-commerce efforts relates to how the social network is perceived by end users. It’s not clear that many Twitter users see it as a place to discover products, given its still text-heavy nature. (Twitter, over the years, shut down other efforts that could have added more video to its site, including its live video platform Periscope and short-form video platform and TikTok precursor Vine.)

Meanwhile, today’s online users tend to shop on social media via photos and videos on Instagram, and increasingly through videos on TikTok. The viral nature of TikTok’s trends, in particular, can encourage more spontaneous purchases, with TikTok telling its creators in an event last month that 48% of users had at one point immediately purchases a product after they saw it on the platform, and 67% bought even when they weren’t looking to shop.

Twitter clearly wants a piece of that action, too, but its rivals like TikTok don’t make online shopping a feature that’s just tacked on, but rather one that’s a natural extension of the serendipitous discovery the platform already provides through its immersive video and personalized home feed.

At launch, Twitter Shops will only be available to Twitter on iPhone users for the time being.