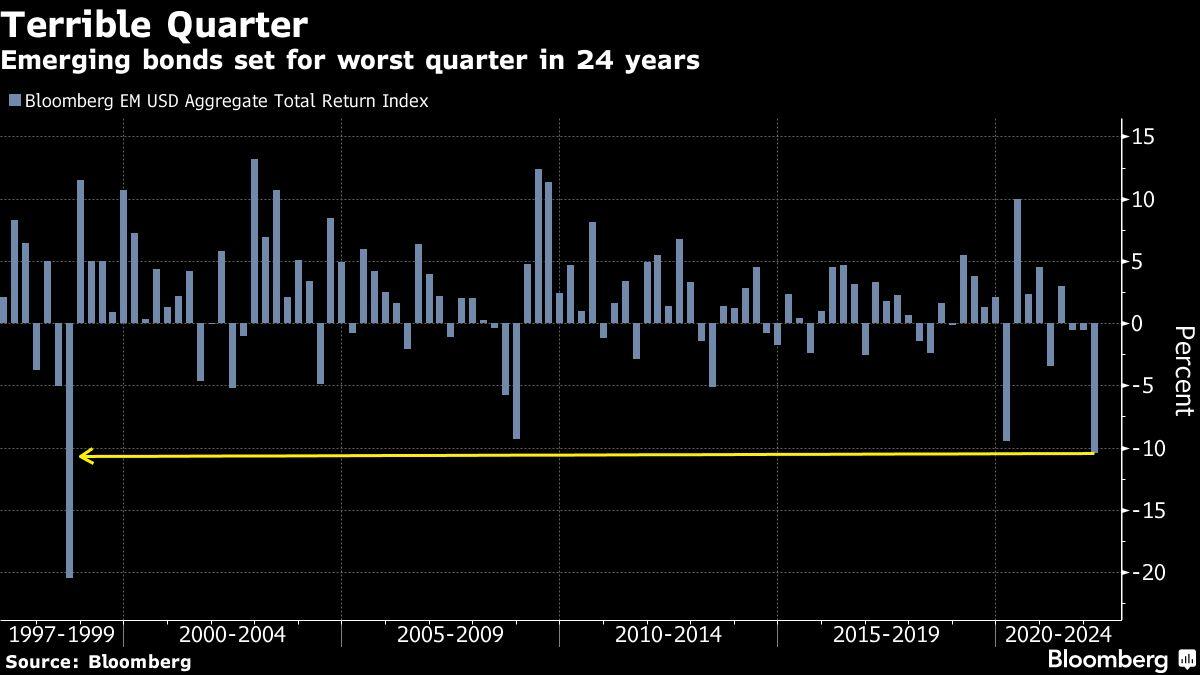 (Bloomberg) — As the worst quarter for emerging-market dollar bonds in 24 years comes to an end, a deep divide is opening up between commodity haves and have-nots, with investors focusing their hopes on exporters in the Middle East and Latin America.

The rapid rise in energy and food costs as the war in Ukraine persists is weighing on the more vulnerable markets while boosting commodity producers. It’s the latest jolt for money managers who went into 2022 expecting inflation to peak as the Federal Reserve embarked on its tightening cycle.

This is becoming an important moment for investors who found themselves caught off guard by the conflict in Eastern Europe, just two years after the coronavirus first sent seismic waves through financial markets.

The war has sparked a bout of risk aversion, putting a Bloomberg gauge of emerging dollar debt on course for its worst quarter since the 1998 Asian financial crisis. Stocks are just shy of their biggest quarterly slide since the pandemic began, while three-quarters of the emerging currencies tracked by Bloomberg are down.

“These are challenging times for emerging-market economies,” said Goldman Sachs’s Andrew Tilton and Kamakshya Trivedi. “The economic costs of Russia’s invasion of Ukraine and the resulting sanctions are likely to be both significant and highly asymmetric.”

The hit from higher energy and food costs has been severe in frontier economies and to countries that import those commodities. Generic oil future prices have risen by 22%, gas futures by 20% and wheat futures by 24% since the war started.

But it also underpins strength in exporters in Latin America, as well as Saudi Arabia, the United Arab Emirates and Nigeria, according to Goldman Sachs.

He warned that the need to subsidize food prices will hit the budgets of commodity importers, especially as the risk of social unrest grows alongside households seeing their purchasing power diminish.

Nordea Investment has shifted its strategy accordingly to buy commodity exporters while selling importers, said Witold Bahrke, a Copenhagen-based senior macro strategist at the firm. He said they bought Colombia and sold Egypt.

Still, for Charlie Robertson, global chief economist for Renaissance Capital Ltd. in London, weakness in those importers might actually be an opportunity.

“What I’d be tempted to do would be to go very long energy importers: Pakistan, probably Turkey — anybody who imports a lot of oil and is getting beaten now,” he said. “They’re cheap and getting cheaper, and it’s very easy from here to extrapolate deep deterioration.”

Other investors are playing it straight. Claudia Calich, a fund manager at M&G Investments, likes higher-yielding oil exporters in Africa and the Middle East, as well as Latin American credits that are tied to the U.S. economy, like Mexico.

Here are the main things to watch in emerging markets in the week ahead:

Is Austin the next US crypto hub? Officials approve blockchain resolutions