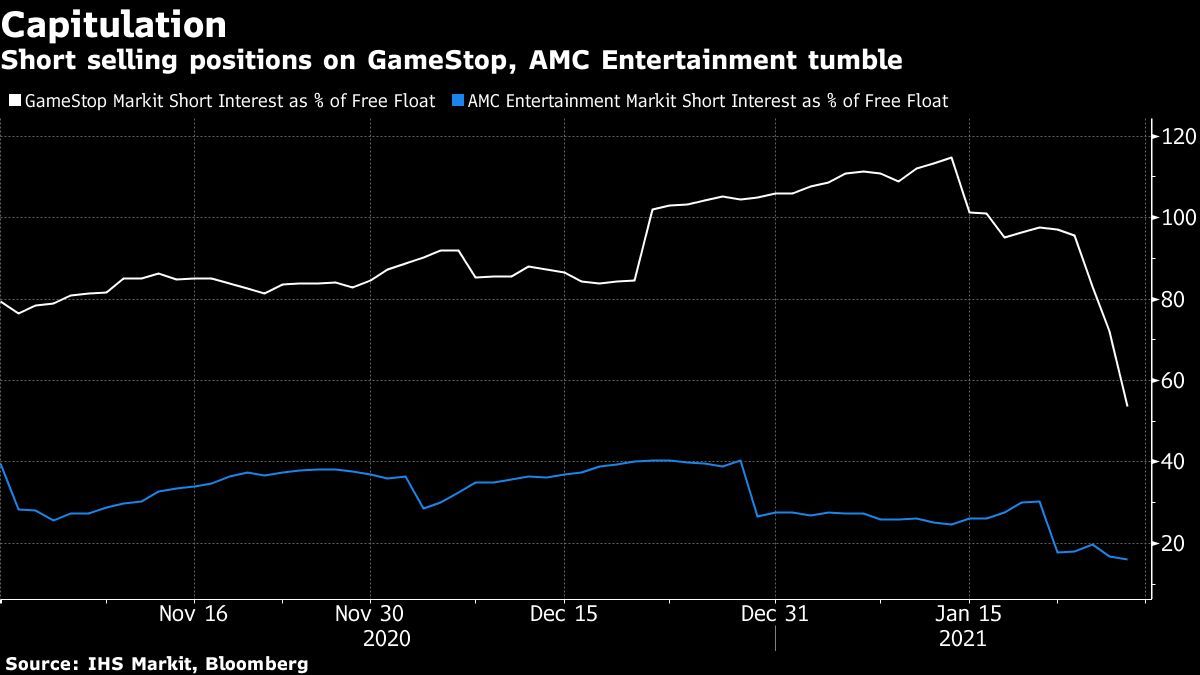 (Bloomberg) — AMC Entertainment Holdings Inc. and some other Redditor favorites extended January’s advance on Monday, while GameStop Corp.’s rally paused, as brokerages removed trading restrictions from all but the most volatile stocks.

AMC rose 26% to $16.50 at the start of Monday’s session, while GameStop sank as much as 13% at 9:31 a.m. in New York. The video-game retailer surged 1,625% last month, propelled by day traders using Reddit forums to take on the Wall Street establishment and inflict multibillion-dollar losses on hedge funds with large short positions.

Robinhood Markets Inc. is continuing to impose trading curbs on GameStop, movie-theater chain AMC and six other stocks, but on Sunday removed restrictions on 42 others. Clients can buy only 1 share in GameStop, and as many as 10 in AMC. The popular trading app put buying limits in place last week after its clearinghouse deposit requirements for equities increased. Other brokerages including Morgan Stanley’s E*Trade also eased restrictions.

The restrictions held the number of shares traded for the Grapevine, Texas-based video game retailer in check while AMC volume took off. At 9:31 a.m. in New York, just 3.5 million GameStop shares had been traded while AMC’s volume was at 80 million, making it the most actively traded stock on Monday morning worth a dollar or more.

CMC Markets, a UK-based financial services company, is only allowing long trades on a handful of Reddit-touted companies including AMC and GameStop, according to a spokesman. Among other stocks recently favored by the Reddit community, cannabis firm Sundial Growers Inc. gained 21% while Healthier Choices Management, which trades at fractions of a penny, soared as more than a billion shares changed hands.

While AMC shares ruled Monday morning, the movie theater chain was downgraded to sell from neutral by MKM Partners. Analyst Eric Handler cut the stock and halved his price target to $1, saying that current share prices are almost double the industry’s historical peak.

“The emotion behind the #SaveAMC movement could carry the shares higher in the near-term, but we believe this valuation-be-damned momentum is not sustainable over the long term,” he wrote.

The attention of the retail speculators looked to be shifting over the weekend to commodities such as silver, which broke above $30 an ounce in a move that like GameStop and AMC can be traced back to Reddit’s WallStreetBets forum.

“The emotion behind the #SaveAMC movement could carry the shares higher in the near-term, but we believe this valuation-be-damned momentum is not sustainable over the long term,” he wrote.

European-listed silver miners surged, with Fresnillo Plc rising as much as 21% in its biggest intraday gain since 2008, and Hochschild Mining Plc climbing 18%. U.S.-listed peers also skyrocketed in early trading, with First Majestic Silver Corp. and McEwen Mining Inc. both rising as much as 32%.

“So far, it is not exactly the GameStop anomaly, but it is a hint that the retail traders who just discovered the strength of their unity are out there, looking for new targets — and apparently bigger ones,” Ipek Ozkardeskaya, senior analyst at Swissquote Bank, said in written comments.

6 things to watch for BTC price this week