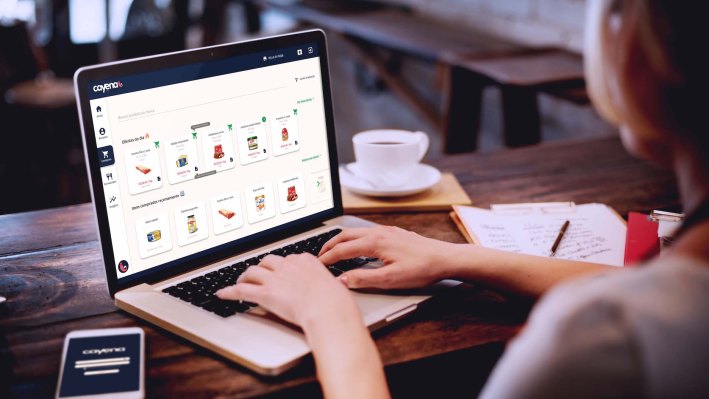 Procuring items to fill the shelves of local stores is not an easy task in Latin America. Orders are mostly still done on paper or over the phone, and sometimes store owners have to drive to the wholesaler to get their orders.

Cayena founders Gabriel Sendacz, Pedro Carvalho and Raymond Shayo believe injecting technology into procurement will make the process much simpler for food preparation facilities, like restaurants, bars, bakeries, hotels and dark kitchens, in their home country of Brazil and across the region.

“Latin American B2B is a massive market, but it is fragmented when it comes to supply and demand,” Shayo told TechCrunch. “About 90% of our customers are small and medium, independent and family-owned businesses. On the supplier side, there are thousands of distributors all with different products, but they have less than 1% of the market share.”

In contrast, the United States has large foodservice companies, like Sysco, U.S. Foods and Gordon Food Service, which hold around 10% market share and offer a one-stop shop for everything from food to cleaning supplies.

As a result, there are several problems Shayo explained, including that across 20 vendors there might be a 40% to 50% difference in price for the same item. It can also take credit card companies around 30 days to pay restaurants, but at the same time, restaurants have to pay in advance for their inventory orders, which results in a working capital problem, especially when ingredients are the largest cost for restaurants, he added.

Simply put, it is easy for restaurants in Latin America to get behind and stay behind. So they created a business-to-business marketplace, targeting the $100 billion wholesale food industry in Latin America, that enables users to source inventory from multiple suppliers at one time and get orders delivered the next day. It is also offering add-on services like buy now, pay later financing.

Users can browse through the products and get a quote on the selected items. Cayena’s algorithm takes into account what is available from the suppliers and the user’s budget and provides the best combination of suppliers. The company utilizes a drop-ship model for delivery and once the order is made notifies the suppliers to deliver the order.

After launching the marketplace in 2020, the company saw its customer base grow 10 times in one year and average ticket sizes multiplied by four times, as it became harder for restaurants to procure inventories, with the average customer purchasing from Cayena five times a month.

That prompted the company to go after additional capital, including a $3.5 million round in late 2021 led by Picus Capital, after initially raising $550,000 in a round led by Canary.

Business was so good that shortly after the seed round in September, the founders saw Cayena double in growth and keep that pace every two months or so as it reached a milestone of R$100 million, or nearly $200 million, in annualized transaction volume across its presence in 50 cities in the state of São Paulo.

All of that acceleration caught the attention of investors, and the company was preempted with a $17.5 million Series A investment, led by Vine Ventures, that also included participation from MSA Capital, Picus Capital, Canaan Partners, Clocktower Ventures, FJ Labs, Femsa Ventures, Gilgamesh, Astella, Endeavor and GraoVC. This gives Cayena just over $21 million in total funding.

“It is a very hot market right now, which is a good thing because it has become easier for investors all over the world to compare and benchmark which companies are successful,” Shayo said. “A few years ago, it was hard to compare, but it is clear who is taking different approaches and strategies now.”

Due to its business model, Cayena doesn’t need to invest in warehouse, trucks or distribution, just the technology, so much of the new capital will go into hiring. Shayo expects to double the team of 60 by the end of the year. The company will also focus on product and technology to create new financial products and expand geographic suppliers.

Next up, the founders see opportunity in Latin America as a whole, so future plans are to first scale toward being the largest food services supplier in Brazil, without having a single truck, in the next one to three years, then expand around the region.

This Is The Ultimate Donald Trump Stock: Is DWAC A Buy As Truth Social Launches?