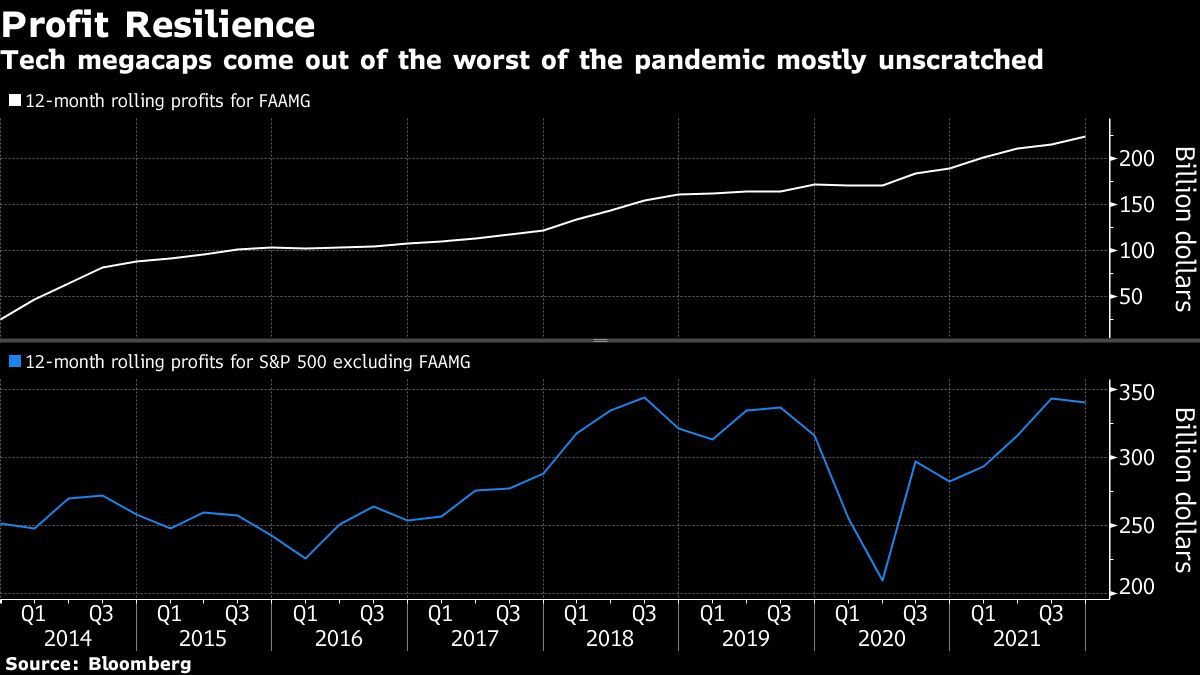 (Bloomberg) — Hedge funds have fallen back in love with technology giants after spending the final months of last year cutting back on these stocks.

Just days before earnings land from the likes of Apple Inc. and Amazon.com Inc., professional investors turned more upbeat the industry. On Tuesday, the cohort made its largest net buying in a month, according to data compiled by Goldman Sachs Group Inc.’s prime brokerage. As a result, their net exposure in tech megacaps jumped at one of the fastest paces in recent years.

Their renewed interest reflects confidence in the earnings power of a group whose resilience has been underlined during the Covid-19 pandemic. The big five — Facebook Inc., Apple, Amazon, Microsoft Corp. and Google’s parent Alphabet Inc. — are expected to report faster profit growth than the rest of the market for a 12th straight quarter, analyst estimates compiled by Bloomberg Intelligence show.

“Just because we’re coming out of a Covid-related economic freeze, that doesn’t mean the trend of digitization, software, automation is going away,” said Giorgio Caputo, senior fund manager at J O Hambro Capital Management. “Many of those larger-cap software and internet companies are very well positioned — advertising is continuing to move online, firms continue to move to the cloud.”

Hedge funds tracked by Goldman Sachs have boosted exposure to tech megacaps, with their long/short ratio in the group climbing to 20.5% from a low of 14% reached earlier this month. While the tilt trails peak levels seen last year, it flies in the face of the more widely held notion that the tech giants won’t be able to sustain their robust gains as the recovery broadens out.

Those turning more cautious on tech include Sean Darby of Jefferies and Savita Subramanian at Bank of America Corp. In a survey this month, the bank’s money managers said they’ve reduced tech allocation to a two-year low while pouring money into banks, small-caps and energy shares — companies seen benefiting the most from an economic rebound.

“There’s near-term optimism, almost like a last hurrah,” he said, adding that it comes “before rising rates and any of the concerns around big tech with a Democratic government slows it down.”

A rotation away from the stay-at-home trade makes sense amid the progress in vaccines and government aids. Profits for industries from energy to industrials are forecast to snap back this year, delivering the faster expansions in the S&P 500.

But Netflix Inc.’s 17% rally Wednesday on blowout results is a reminder of the risk of exiting too early. The tech-heavy Nasdaq 100 Index just posted one of its best weeks relative to small caps in recent months, with a 4.4% rally — twice the Russell 2000’s gain.

While tech earnings are expected to trail the market this year and next, it’s a testament to how well they did during 2020’s recession. For example, growth in the big five tech companies’ combined profits is likely to lag starting next quarter. Still, at an estimated $224 billion, their 2021 profits will be 31% above what they earned in 2019, the year before the pandemic hit — four times the growth for other companies in the S&P 500 during that span.

Even this bout of subpar expansion is likely to be short-lived. Going by analyst estimates, the tech giants will get their edge back early next year.

“The Amazons of the world, the need for digital connection and digital communication, that’s not going away even as the economy improves,” said Nela Richardson, chief economist at ADP. “There’s a growing recognition that tech’s dominance continues to persist.”