Ivanka Trump says she was deposed for 5 hours in inaugural spend probe. Here's what she failed to mention 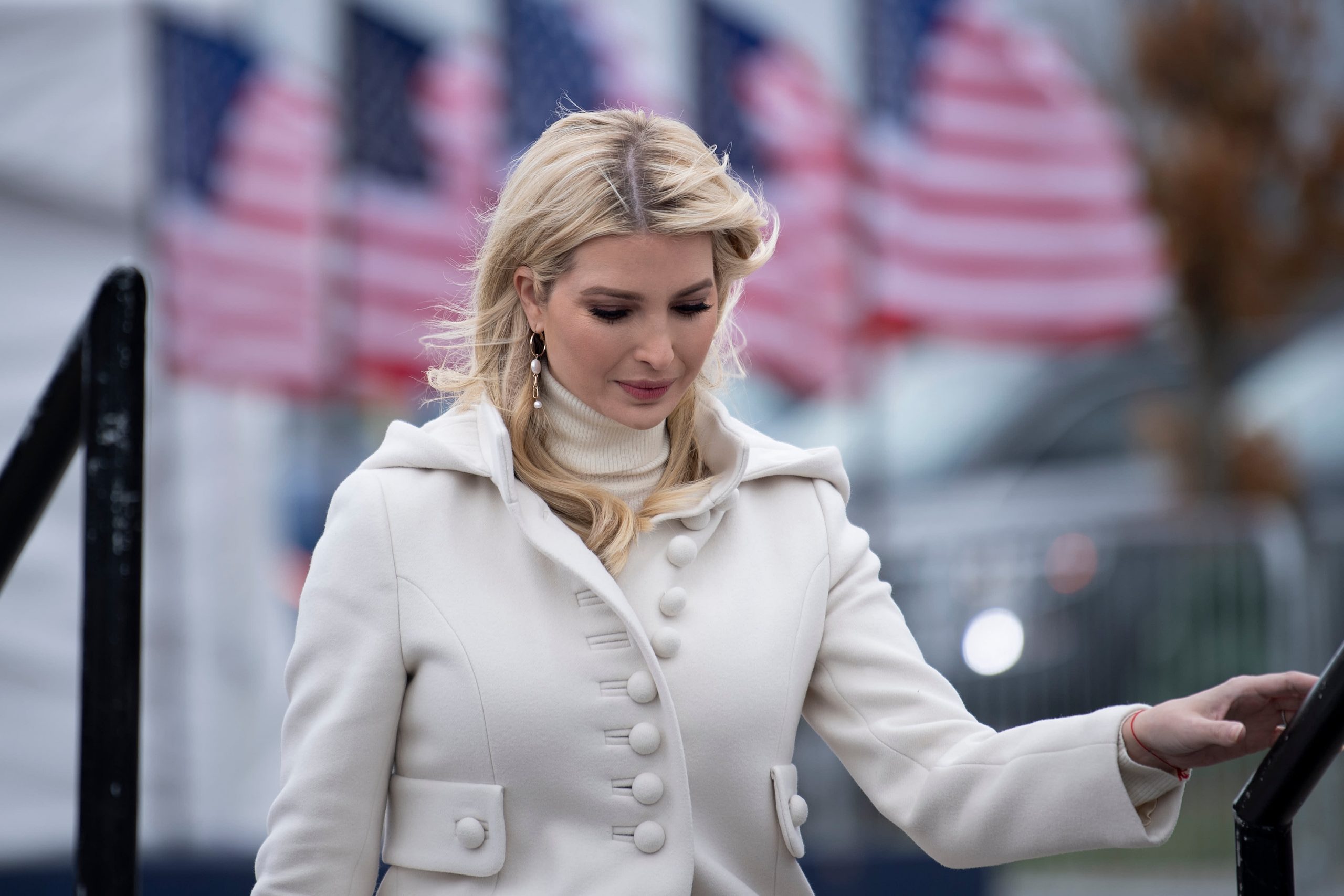 But in doing so she conspicuously omitted the $3.6 million question posed by a Republican felon that underscored fears the Trump family was profiting from a nonprofit set up to celebrate the White House victory.

Ivanka Trump’s tweet condemning the suit as „politically motivated“ included an email that indicates she told managers of her father’s hotel in Washington to charge „fair market rate“ for its services during the inauguration after Donald Trump won the 2016 presidential election.

But what the senior White House advisor did not mention is that she only said that after being warned by a top inaugural committee official of the „quite high“ minimum rate of $3.6 million for food and beverage and use of the banquet halls during inauguration week that the committee was being quoted by the Trump International Hotel.

Nor did Ivanka Trump mention that the mere fact of having an incoming president having his inaugural committee buy goods and services from a hotel he owned was unprecedented in U.S. history, much less when that hotel wanted to charge that committee, a nonprofit entity funded by private donors, millions of dollars for those services.

Ivanka Trump’s effort to spin news of the deposition comes as President Donald Trump’s company faces a criminal probe by the Manhattan district attorney’s office that relates to his income taxes, as that company is under investigation by the New York state attorney general for possible misstatement of asset values and as her father is being sued by a writer for defaming her after the writer said he raped her in the 1990s.

And it comes more than a month after her brother Eric Trump was deposed in the New York AG’s case after trying to duck complying with a subpoena until after the presidential election, which their father lost by nearly 7 million votes to President-elect Joe Biden.

„An independent investigation by my office has revealed that the Inaugural Committee made exorbitant and unlawful payments to the Trump Hotel to rent event space for Inaugural activities,“ Racine said. „This came as a result of coordination between Inaugural Committee Deputy Chairman Rick Gates, Trump International Hotel management, and members of the Trump family.“

Racine’s suit alleges more than $1 million in improper payments to the hotel by the inaugural committee.

On Tuesday, as part of that suit, Ivanka Trump, who is a senior White House advisor to her father — as is her husband, real estate mogul Jared Kushner — was deposed by lawyers for the AG’s office.

„This week spent 5+ hours in a deposition with the Democrat D.C. AG’s office where they questioned the rates charged by the Trump Hotel at the inauguration,“ Ivanka Trump griped in her tweet Thursday.

„I shared with them an email from 4 years ago where I sent instructions to the hotel to charge ‚a fair market rate‘ (see below) which the hotel then did,“ she wrote.

„This ‚inquiry‘ is another politically motivated demonstration of vindictiveness & waste of taxpayer dollars.“

The tweet includes what purports to be an email that Ivanka Trump sent the hotel’s managers on Dec. 14, 2016, saying, „Just seeing this. why don’t you call and negotiate. It should be a fair market rate.“

Not included in her tweet are prior emails about the hotel’s rates or subsequent ones, which underscore the concern among top inaugural committee officials about whether the Trump hotel was overcharging for its services, and in doing so lining the Trump family’s pockets. Those emails are posted online by the DC AG’s office.

One email, on Dec. 10, 2016, was from Patricia Tang, director of sales and marketing for the hotel, who told inaugural committee staffer Ramsey Ratcliffe that the price for room rental and minimum F&B — food and beverage — „is $3,600,000.“

Ratcliffe forwarded that email less than three minutes later to his other inaugural committee staffers with a one word comment: „Ummm….“

Gates, a longtime Republican consultant and high-ranking official in the Trump 2016 campaign, then forwarded Ratcliffe’s and Tang’s emails to Ivanka Trump.

Gates told Ivanka he had „two concerns“ with Tang’s email.

„First, the cost itself seems quite high compared to other property buyouts for the week,“ Gates wrote, referring to the costs of renting other non-Trump-owned hotels out for inauguration week.

„Second, I am a bit worried about the optics of PIC [Presidential Inaugural Committee] paying Trump Hotel a high fee and the media making a big story out of it,“ added Gates, who within two years from that time pleaded guilty to federal criminal charges of conspiracy and to making false statements related to his work with former Trump campaign chief Paul Manafort in Ukraine.

Two days after that email, Ivanka Trump replied to Gates, saying she had asked „our GM Mickael“ Damelincourt, of the hotel „to call you directly.“

Gates replied that he and Damelincourt were planning to meet the next morning „and sort out the issues.“

An email from Damelincourt to Gates on Dec. 16, 2016, which notes that this was „a follow up to our conversation earlier today,“ quotes a revised price of $700,000, or $175,000 per day, for the entire ballroom space for Tuesday, Wednesday, Thursday and Friday of inauguration week. And there would be no minimum charge for food and beverage, the general manager said.

Later that same day, the woman running the inauguration preparation efforts, Stephanie Winston Wolkoff, who was best friends with first lady Melania Trump before they had a falling out, wrote Gates to „express my concern“ about the revised rates quoted by the Trump-owned hotel.

„These are events in PE’s [president-elect’s] honor at his hotel and one of them is with and for family and close friends,“ Winston Wolkoff wrote.

„Please take this into consideration that when this is audited it will become public knowledge that the locations were also gifted and costs underwritten to lower rental fees,“ she wrote. „I understand that compared to the original pricing this is great but we should look at the whole context.“

That fee would be $90,000 less per day than the lower, revised price quoted by the general manager that Ivanka Trump had instructed to ask for a „fair market rate“ from her father’s inaugural committee.

Alan Garten, a spokesman for the Trump Organization, told NBC News on Wednesday when asked about Ivanka Trump’s deposition, „Ms. Trump’s only involvement was connecting the parties and instructing the hotel to charge a ‚fair market rate‘, which the hotel did.“

Garten and a White House spokesman did not immediately respond to a request for comment from CNBC on Thursday about Ivanka Trump’s tweet.

Ivanka Trump and her brother Donald Trump Jr. previously were targeted years ago by prosecutors in the Manhattan district attorney’s office, who were looking into whether prospective buyers at the Trump SoHo hotel in New York had been misled about the building’s success.

The two Trump children narrowly avoided being criminally charged in 2012, according to an investigation by The New Yorker, ProPublica and WNYC.

The outlets reported that Marc Kasowitz, a lawyer for Ivanka and Donald Jr., had donated $25,000 to DA Cyrus Vance’s reelection campaign and directly appealed to him that the case should be dropped.

That donation had been returned before Vance met with Kasowitz, according to the outlets.