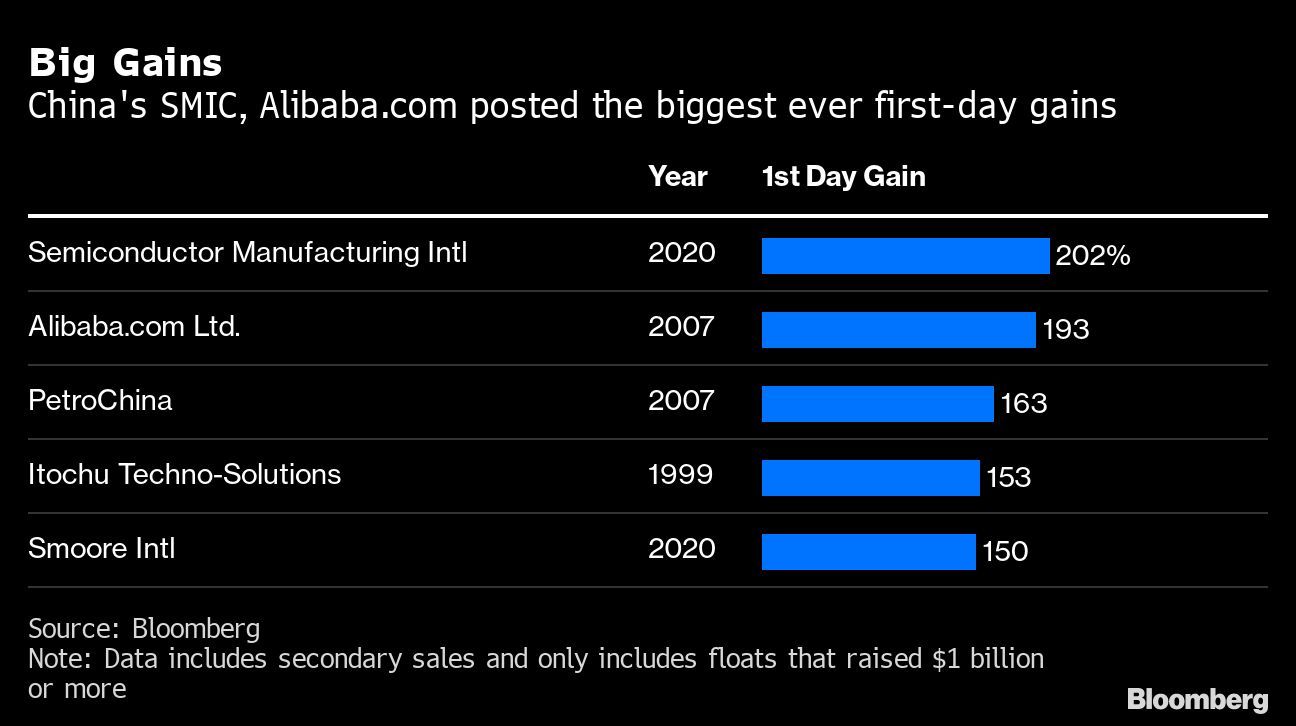 (Bloomberg) — Kuaishou Technology, the operator of China’s most popular short-video service after ByteDance Ltd.’s Douyin, jumped 194% in its Hong Kong debut after a $5.4 billion initial public offering that attracted hundreds of billions of dollars of orders.

The shares opened at HK$338, compared with the IPO price of HK$115, valuing the Tencent Holdings Ltd.-backed firm at $179 billion. The company sold shares at the top of its price range in a deal that ranks as the world’s biggest internet IPO since Uber Technologies Inc.’s $8.1 billion U.S. share sale in May 2019.

That spectacular rise confers on Kuaishou a price tag rivaling ByteDance — which last sought funds at a $180 billion valuation — and ushers the nine-year-old video app into the ranks of China’s largest tech corporations. Once known for peddling quirky depictions of rural Chinese life, Kuaishou cements its place among a generation of mega-startups liken food delivery giant Meituan and ride-hailing leader Didi that grew up in the years after Alibaba Group Holding and Tencent Holdings.

If the gains hold, that would give Kuaishou the second-best debut ever for an IPO over $1 billion in the world, data compiled by Bloomberg show. It joins an already long list of floats that have popped on their first day of trading in recent months amid a glut of liquidity and ultra-low interest rates.

Morgan Stanley, Bank of America Corp. and China Renaissance were joint sponsors of the deal.

The stellar debut will be an encouraging sign for larger rival ByteDance, which is said to be in discussions to list some of its assets in Hong Kong. Long a rumored IPO candidate, the TikTok owner was bogged down last year in fighting a U.S. ban on its globally popular app after being labeled a national security threat.

“A successful listing by Kuaishou will pave the way for its larger rival,” said Bloomberg Intelligence senior analyst Vey-Sern Ling. “Douyin will be more motivated to come to the market and investors can get better insight into China’s short-video industry with Kuaishou’s regular disclosures going forward.”

Kuaishou’s coming-out party broke records in Hong Kong for the number of retail investors subscribing to its shares and the amount pledged in the process. About 1.4 million mom-and-pop investors — one of every five people in the city — submitted HK$1.26 trillion ($163 billion) of orders, while institutional buyers stumped up almost $200 billion.

The demand matched the frenzy for the Hong Kong leg of Ant Group Co.’s mega IPO, which drew in HK$1.3 trillion of bids for its retail tranche, before the planned $17.2 billion offering collapsed.

“Growth tech companies are still very much in demand,” said Gary Dugan, chief executive officer at the Global CIO Office in Singapore. “With the world still struggling with the Covid crisis, investors remain focused and investing more in tech stocks that have a strong growth story. Hence, we expect demand for these types of IPOs to remain strong and likely early trading share price premiums to tend to be extraordinary.”

Founded by former Google employee Su Hua and Cheng Yixiao as an app built around sharing animated GIF images, Kuaishou pivoted to short video in 2013 and added live streaming in 2016, landing footholds in what eventually became two of the hottest social media formats in the world.

At the opening price HK$338, the net worth of Su has jumped to more than $21.1 billion and Cheng is worth $14.7 billion. Two other company executives’ fortune also got boosted to over $3 billion.

The firm had 264 million average daily active users on its main Kuaishou app as of November 2020, according to its prospectus, less than half the 600 million on Douyin. Still, it’s been growing fast.

Revenues climbed 49% to 40.7 billion yuan ($6.3 billion) in the first nine months of last year, after the company ratcheted up monetization efforts through advertising and e-commerce. While Kuaishou offers free access to its main platform, the startup takes a cut of the tips users give to their favorite live-streamers who perform viral challenges, lip-synch to the latest pop songs and play video games.