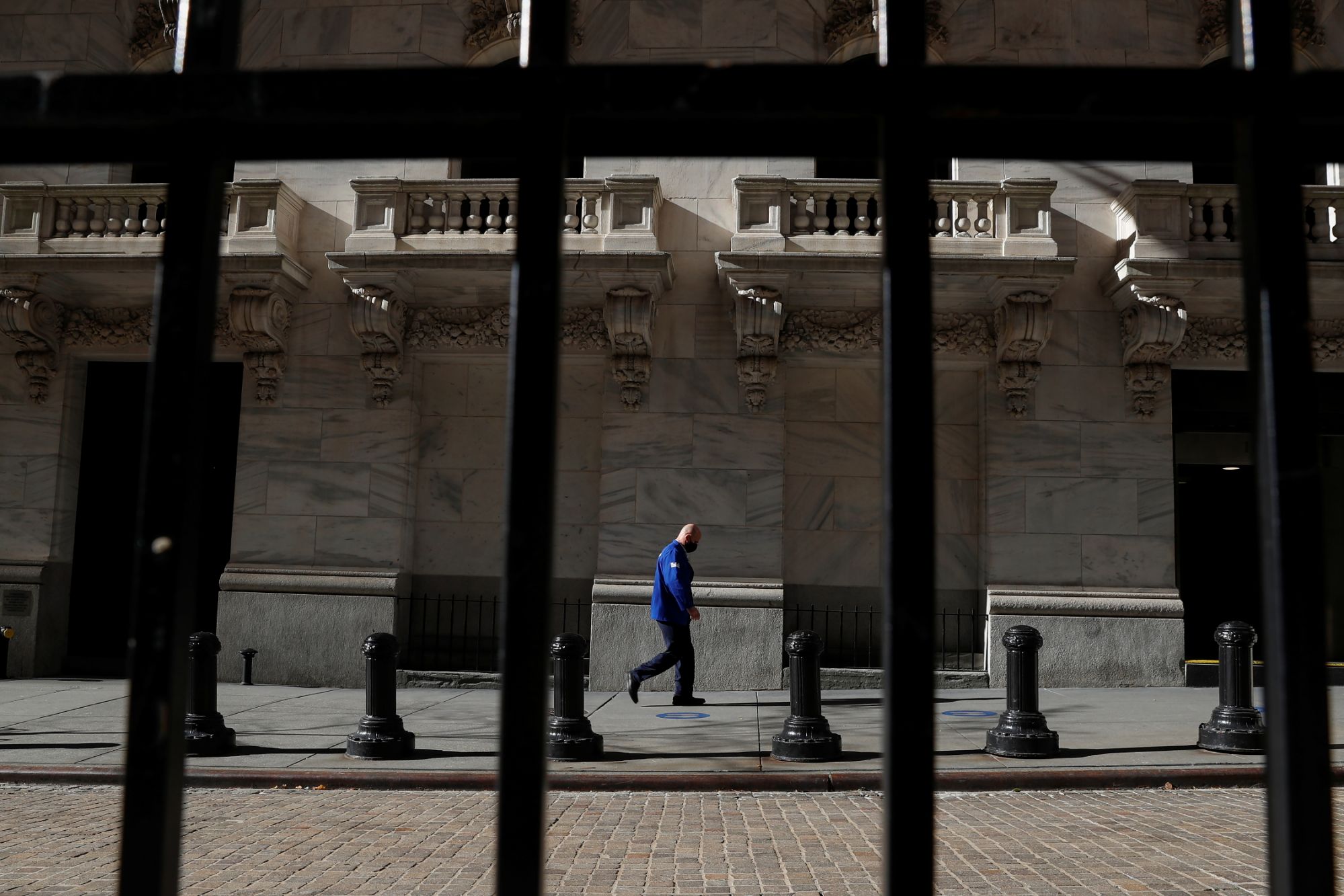 Stocks fell on Thursday after a new report on the U.S. labor market sharply disappointed, ending a streak of better-than-expected economic data and underscoring the incomplete economic recovery still taking place amid the ongoing pandemic.

The Dow fell more than 200 points, or 0.7%, around noon in New York, after component company Walmart slid after posting disappointing fourth-quarter earnings. The Nasdaq underperformed for another session, dipping by more than 1% as tech stocks gave back more gains and a rotation into cyclical stocks extended further. Treasury yields ticked higher, and the benchmark 10-year yield hovered around the one-year high of 1.31% after a rapid run-up this week.

The drop in U.S. equities came after the Labor Department’s weekly report showed initial jobless claims unexpectedly jumped to a one-month high last week, as the U.S. labor market recovery stagnated. But new jobless claims data aside, an increasing number of economic and earnings data have pointed to a strong recovery coming out of the pandemic, even with the national vaccination program still under way. Retail sales surged by the most in seven months in January, handily exceeding expectations as government stimulus lifted consumer spending at the start of the year. And on the monetary policy side, the Federal Reserve’s latest meeting minutes suggested the central bank would maintain its aggressive asset purchase program and low interest rate policies to support the economy coming out of the pandemic.

„What has happened is that these cyclical rotations continue to be supported by, obviously the stimulus program that put the consumer at the front end of what may come down the road,“ Omar Aguilar, Charles Schwab investment manager, told Yahoo Finance. „And therefore it’s not surprising that you actually see higher yields in Treasuries, and you actually see risky assets being in high demand.“

Though stocks reacted mutedly to the latest set of positive headlines including the retail sales report, the flurry of better-than-expected data has helped keep a floor under risk assets, some strategists noted.

„We’ve seen a two steps forward, one step back approach. Which means that the market trends higher and higher, we see a pause, we see a very brief pullback, and then the market takes a leg up again. I think we’re going to continue to see that, because there’s some positive news and positive headlines that we’re either sitting on or are in the midst of right now,“ Jonathan Corpina, Meridian Equity Partners senior managing partner, told Yahoo Finance. „We’re talking about vaccination program roll-out – we’re seeing that each day, it’s getting much more successful. You see the retail numbers like today, that ties into stimulus. Stimulus money is going in the right direction. Earnings expectations have been tepid so far, and I think that’s widely accepted by markets, and that’s viewed as good news.“

Thursday morning, Walmart (WMT) posted fourth-quarter earnings that trailed estimates, though e-commerce and overall sales grew strongly. Thursday afternoon, companies including Planet Fitness (PLNT) and Roku (ROKU) are poised to report quarterly results, rounding out what has so far been a steady stream of better-than-expected fourth-quarter reports despite the ongoing pandemic.

Elsewhere, the House Financial Services Committee began holding a hearing at noon eastern on Thursday over recent market volatility involving GameStop and other heavily shorted stocks. Individuals including Vlad Tenev, CEO of the popular online brokerage firm Robinhood, as well as Citadel CEO Kenneth Griffin and Reddit co-founder Steve Huffman were among those testifying in the hearing.

The three major indexes remained lower with the afternoon session under way on Thursday.

The S&P 500 was lower by 0.9%, as the energy, information technology and communication services sectors underperformed. The utilities sector was the only one still in slightly positive territory.

The Nasdaq fell more than 1.3% as each of the Big Tech FAANG names declined, though Amazon was a relative outperformer and was only a tick below the flat line. The Dow dropped more than 250 points, or 0.9%, as component company Walmart sank 5% after earnings.

Here’s where markets were trading shortly after the opening bell:

U.S. import prices rose at the fastest rate since 2012 in January, as a jump in demand for imported goods pushed prices higher. Export prices rose even more sharply, as global commerce began to pick back up after a COVID-related stall.

Import prices increased by 1.4% in January over December, the Labor Department said Thursday, outpacing the rise of 1.0% expected, according to Bloomberg consensus data. Import prices had risen by 1.0% in December.

Much of the gain was due to a rise in energy prices, though price increases were also broad-based across other categories. Excluding petroleum, import prices still rose 0.9%, or more than double the 0.4% month-over-month rise expected.

U.S. homebuilding slowed sharply at the beginning of 2021 after momentum from a historically strong 2020 began to wane. However, authorizations for new construction skyrocketed, pointing to more homebuilding later this year.

Housing starts slid by 6% month-over-month in January to reach a seasonally adjusted annualized rate of 1.58 million, the Commerce Department said Thursday. This slowed precipitously following an 8.2% jump in December, and marked the biggest monthly drop since August. Consensus economists expected a rise of just 0.5%, according to Bloomberg data.

Building permits, however, unexpectedly surged, rising 10.4% to a seasonally adjusted annual rate of 1.881 million. This marked a third straight monthly gain, and represented the biggest increase in July.

Initial unemployment claims unexpectedly rose for back-to-back weeks, jumping above 800,000 yet again to a one-month high.

Weekly new claims for the week ended February 13 totaled 861,000. This was significantly higher than the 773,000 expected, and also rose from the prior week’s upwardly revised level of 848,000.

Continuing jobless claims ticked down slightly to 4.494 million, though this was still higher than the 4.425 million expected for the week ended February 6. The prior week’s continuing claims were revised up to 4.558 million, from the 4.545 million reported earlier.

Shares of Walmart (WMT) dipped 5% in pre-market trading after the retail giant posted a mixed fourth-quarter report, with sales topping estimates but earnings and guidance missing the mark.

Fourth-quarter revenue grew 7.3% to $152.08 billion, handily topping estimates for $148.38 billion, according to Bloomberg consensus data. Comparable same-store sales, a closely watched metric for efficiency at retailers, grew 8.9%, sharply accelerating from the 1.8% growth rate from the same quarter in 2019. However, fourth-quarter adjusted earnings were $1.39 per share, below estimates for $1.50.

Looking ahead, Walmart said it expected comparable sales growth would be only in the „low single-digits“ for its flagship stores, pulling back from 2020’s surging pace. The company also noted that more costs would be coming down the line, and said fiscal year 2022 capital expenditures would total nearly $14 billion as it builds out supply chain capacity, automation and works to improve its customer experience. It also plans to invest in wages to raise the average associate wage to more than $15 per hour in the U.S.

Here’s where markets were trading ahead of the opening bell:

Here’s where markets were trading Wednesday evening as the overnight session kicked off: