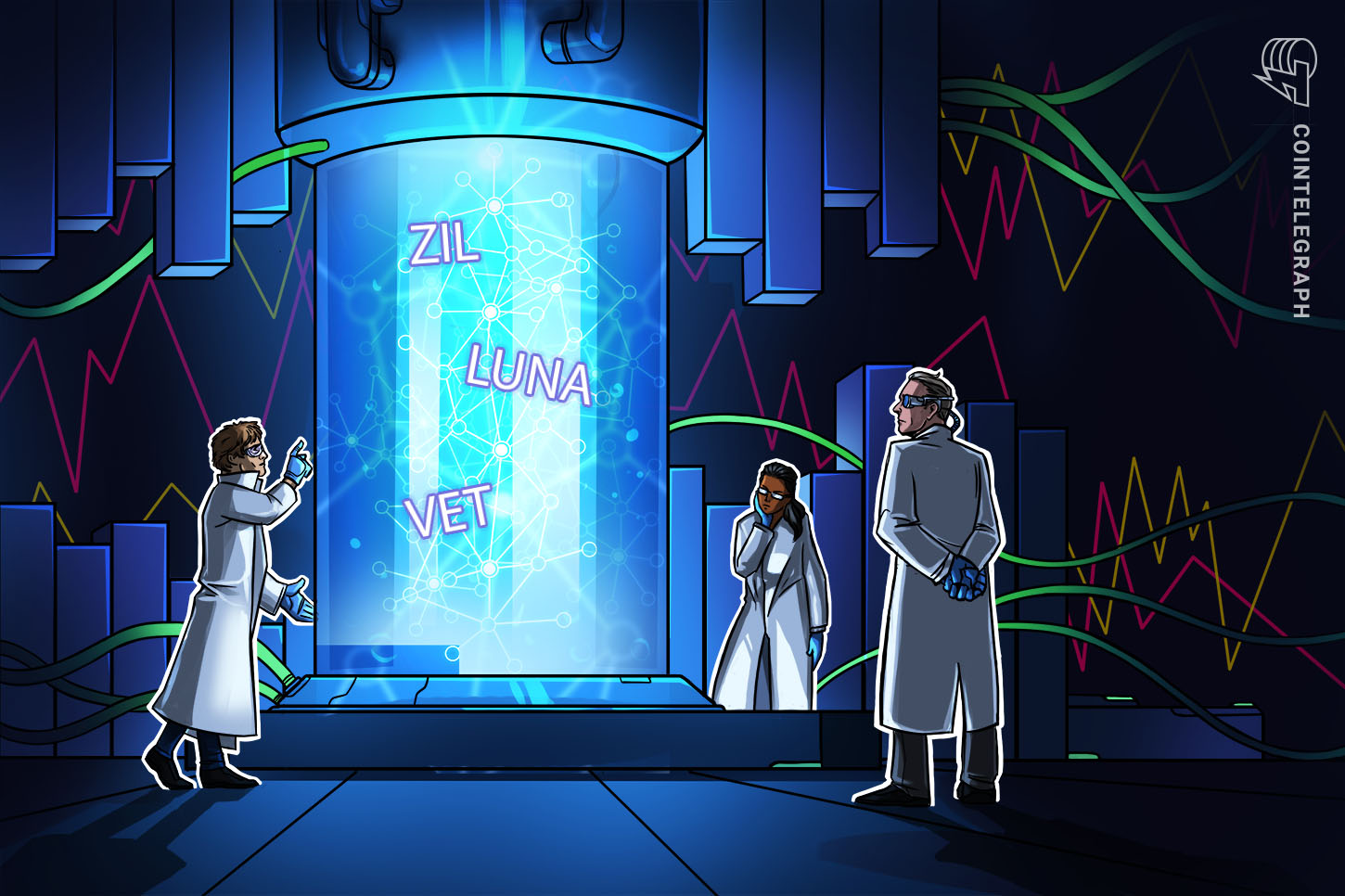 During a bull market, negative news is quickly digested and the collateral damage is often limited. Therefore, even as XRP price dumped aggressively due to the uncertainty regarding the outcome of the U.S. Securities and Exchange Commission lawsuit, other altcoins have largely been unaffected.

Moreover, as Bitcoin’s (BTC) strong rally takes a breather, several altcoins have broken out of their overhead resistance levels and are attempting to resume their uptrend. Let’s look at a few tokens that have risen sharply in the past few days and analyze their charts to ascertain whether the rally could extend further.

Zilliqa (ZIL) has risen sharply in 2020. Part of the rally could be attributed to the decentralized finance boom that dominated a large portion of the year.

After launching its decentralized exchange ZilSwap on Oct. 5 and non-custodial staking on Oct. 14, the token rallied considerably. These new features allowed the community to stake directly into the smart contract whereas previously they had to do it through a third-party intermediary.

To date, the community has staked about 30.49% of the total outstanding supply and the low eligibility threshold of 10 ZIL may have attracted greater participation from token holders.

During the coronavirus pandemic, most people stayed indoors and spent their time on social media. Thus, the timing of Zilliqa’s SocialPay launch could not have been better. The platform launched in May and it rewards users for sharing Zilliqa’s updates and announcements on Twitter.

All these fundamental developments may be the reason for the increase in the number of wallet addresses and monthly transactions in 2020. But can the token continue its outperformance in 2021? Let’s study its charts to find out.

The altcoin has been in a strong uptrend and it rallied from an intraday low at $0.0296388 on Dec. 12 to an intraday high at $0.0996 on Dec. 27, a 236% rally in about two weeks. Usually, these vertical rallies are not sustainable in the long run. Periodic corrections or consolidations are needed that can cool the up-move and increase the longevity of the trend.

The ZIL/USD pair has formed successive inside day candlestick patterns on Dec. 28 and today. This suggests a contraction in volatility as the bulls and the bears decide on the next directional move.

If the inside day resolves to the upside, the uptrend could resume. Conversely, if the inside day candle is followed by a sharp down-move, the bears may have gained the upper hand and a deeper correction would be expected.

A strong bounce off this support hi that the positive sentiment remains intact as traders are accumulating on dips. The bulls will then attempt to resume the uptrend and if they can push the price above $0.0996, a rally to $0.14 may be possible.

On the other hand, if the price slides below the 20-day EMA, it will suggest that a short-term top could be in place as bulls are not keen to buy on dips.

Terra Protocol’s LUNA seems to have benefited from greater adoption of its existing products and the proposed launch of new ones. Its Chai payments app witnessed over 2.8 million transactions in November with payment volumes crossing $90 million.

To capitalize on the strong demand for U.S. stocks, commodities, and ETFs, Terra launched the Mirror Protocol on Dec. 4, enabling the creation and trading of synthetic assets. This could continue to attract traders as long as the assets remain in a strong trend.

Terra is also attempting to address the product referral marketing category that mainly benefits the direct referrer. The protocol plans to officially launch BuzLink, a marketing tool in February 2021, that will reward the entire referral chain after the sale is done.

LUNA has risen from an intraday low of $0.45 on Dec. 24 to an intraday high at $0.70 today, a 55% gain within a week. The upsloping moving averages and the relative strength index (RSI) close to the overbought zone suggest bulls have the upper hand.

The LUNA/USD pair broke above the $0.57 overhead resistance on Dec. 28, which completed a rounding bottom pattern. This bullish setup has a target objective of $0.86.

However, the Doji candlestick pattern with a long wick today shows that traders are booking profits at higher levels. This could drag the price down to the breakout level at $0.57.

If the pair rebounds off this level or even from the 20-day EMA ($0.51), it will suggest that bulls are in control. A break above $0.70 could resume the uptrend.

Contrary to this assumption, if the bears sink and sustain the price below $0.57 and the 20-day EMA, it will suggest that the recent breakout was a bull trap. The trend may favor the bears if the pair drops below $0.45.

The coronavirus pandemic has made people and businesses even more aware of the power of digital technology. VeChain (VET) developed the E-HCert App in collaboration with the Mediterranean Hospital of Cyprus to store COVID-19 test records. After its successful implementation, Aretaeio Hospital has also joined the VeChain ecosystem to integrate its lab testing services, which will make the data readily accessible to patients to use as required.

The VeChainThor blockchain also recently received a 5-Star-Rated Blockchain Service Certificate from TÜV Saarland, a European certification body. This could increase confidence in its ecosystem and also improve investor sentiment about VET token. In a further boost, Grant Thornton Cyprus revealed itself as one of the VeChainThor Authority Masternodes. These developments could open up new possibilities for the future.

However, if the VET/USD pair does not break below $0.018, the bulls will make one more attempt to drive the price above $0.02210. If they succeed, the pair will complete a rounding bottom pattern that has a target objective at $0.0353.

The 20-day EMA ($0.0165) has started to turn up and the RSI is above 60, which suggests that bulls have the upper hand. Even a consolidation between $0.018 and $0.0221 will be a positive sign and it will increase the possibility of a breakout of the overhead resistance.

Contrary to this assumption, if the price again gets rejected at $0.02210, it could attract profit booking from the short-term traders and that may pull the price back below the moving averages. Such a move could suggest that the pair may consolidate in a large range for a few days.

The views and opinions expressed here are solely those of the author and do not necessarily reflect the views of Cointelegraph. Every investment and trading move involves risk, you should conduct your own research when making a decision.

Trump is trying to link stimulus checks, defense spending to a contentious tech protection – what to know

Time to Buy the Dip in fuboTV Stock? Analyst Weighs In